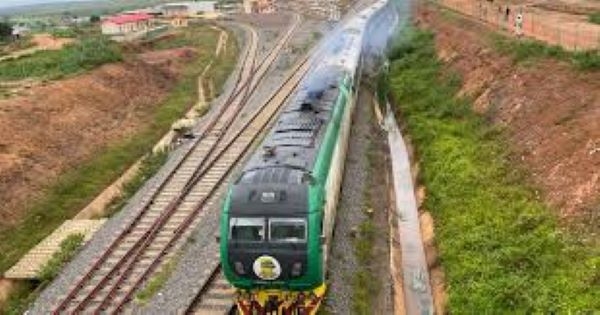 “From Rigasa, the next station is Kakau, then Dutse, then Rijana,” announces Ade, a train conductor with the Nigerian Railway Corporation (NRC). He is dressed in the company’s green and yellow and wears a reflective safety vest as the train departs from Rigasa station in Kaduna, northwestern Nigeria. Its final destination is the country’s capital, Abuja.

Rigasa, a densely populated urban slum, is the site of the main rail terminus along the 186km (115.6 miles) Kaduna-Abuja railway line.

The Chinese-built train has a sparkling white and cerulean interior and features 10 neat, air-conditioned carriages with comfortable seats made of plastic draped in green cotton coverlets. The train, quiet and serene, carries only half its capacity of about 1,000 passengers amid precautionary social distancing measures to curtail the spread of COVID-19. It is a contrast to the overbooked trains, with passengers squeezed into the aisles, that existed before the pandemic.

“Three stops, then you alight at Rijana,” Ade repeats a little later on in the journey as he moves across the aisle checking passengers’ tickets, punching two holes in each. “The train only stops briefly at every station. It does not wait for long,” he warns us.An economic invigoration?

Poor transport infrastructure has long been a big hindrance to economic development in Nigeria. This railway line, opened by President Muhammadu Buhari in 2016, is the first of the country’s standard gauge railway modernisation projects, accommodating high-speed rail lines. It is part of an attempt to reinvigorate Africa’s largest economy as railways make a comeback after decades of neglect.

The British colonial government completed Nigeria’s first rail infrastructure more than 100 years ago to aid the movement of agricultural goods from the northern region to the ports in the south. The service began to decline in the 1970s due to a fall in agricultural exports, mismanagement and government neglect. By 2009, the number of annual passenger rail trips in Nigeria had fallen from its 1963 heyday of 11 million to just one million.

The new standard gauge line – the most widely-used railway track around the world for high-speed trains – connects Abuja with the former colonial capital of northern Nigeria, Kaduna, as part of the $1 trillion Belt and Road Initiative (BRI) unveiled by China in 2013. Nigeria’s 200 million-strong population serves as a ready market for Chinese exports and technology. It is also a lucrative access point into West Africa and the rest of the continent for Chinese exporters.

Matthew T Page, associate fellow of the Africa Programme at Chatham House, the international affairs think-tank based in London, explains that China’s strategic interest in Nigeria is important for the African country’s status as an emerging global power, with huge unmet demand for infrastructure projects.

“It’s a very natural connection,” he says. “Rail projects financed by low-interest Chinese loans allow the Chinese entrepreneurial class in the diaspora to establish themselves in Nigeria, Africa’s largest consumer market where there is a huge demand for Chinese exports. For the Nigerian government, the cost of building and refurbishing the rail would be an extremely large expense.”

The Kaduna railway line began operating in July 2016 with the aim of enabling faster movement of goods and people, easing road traffic congestion and promoting the economic development of towns along the route.

At the opening ceremony of the railway with its nine new stations, President Buhari announced that the service would provide a much-needed alternative transport link between the two cities. The main terminus at Idu Station in Abuja is a large grey building. The substations along the line are similar, albeit smaller, cream-coloured buildings.

But while the railway recorded about one million passengers in its first two years of operation, it has not produced the economic invigoration that the communities hosting the substations hoped for. Residents say the cost of train tickets is prohibitive and the substations are difficult to access.Confusion

After a 40-minute ride from Rigasa through landscapes of lush green savannah, the train arrives at Rijana station, an agrarian and grazing village along the expressway road.

As the doors of the train open, the photographer and I jump out and find ourselves not on a platform, but right in the middle of two tracks, sandwiched between two locomotives, one racing towards Kaduna and another – the one from which we have just alighted – towards Abuja. The sound of the trains – which reach speeds of more than 100km/h (62mph) – is deafening.

At the entrance to Rijana station, a scowling station manager flanked by four other members of staff, three men and a woman, enquires about why we have stopped at the station. He looks to be in his 50s and is dressed in a flowing blue kaftan and traditional blue cap. He is dismissive of our pleasantries.

“Did you buy a ticket for Rijana?” he asks. “If you bought a ticket for Abuja then why are you dropping here?” We explain that we need to stop at the substations between Kaduna and Abuja and ask to buy a ticket from Rijana to the next station at Jere, a journey of about 40 minutes.

There are just four return train trips a day from Kaduna to Abuja. Passengers can only buy one-way, single-use tickets up to two hours before departure from Kaduna, with the date and details of the departure and arrival stations imprinted on them. Passengers making multiple stops along the line have not been anticipated.

The station manager informs us that passengers can only buy tickets physically at departing stations and that the substations no longer sell them. He cannot explain the rationale for this, but says it is a directive from the Nigerian Railway Corporation. He suggests we hail a commercial taxi driving from Kaduna to Abuja on the expressway and get out at Jere, which is just less than an hour away by road.

Our attempts to telephone the NRC via the contact numbers displayed on its website – for help with buying a new ticket – prove futile as both go unanswered.

The station at Rijana consists of a single trackside platform and a modern station building; its red roof standing out against the backdrop of surrounding farmland. Inside, there is a barricaded ticket sales area, a sparse waiting room and some office spaces. From the station, it is a 15-minute walk along a footpath through bushes and farmland to the main expressway that leads into Rijana town.