No district left behind in development – Bawumia 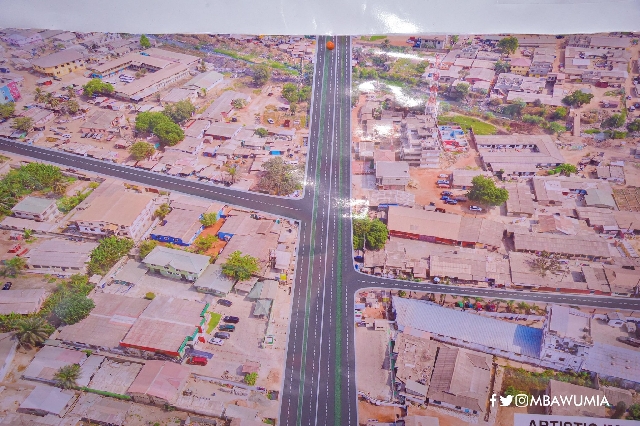 Vice President Dr. Mahamudu Bawumua has stated that the Akufo-Addo government has embarked on a massive infrastructure-for-all programme, which has left no district in Ghana behind since assuming the governance of the country three and half years ago.

Speaking during his presentation of the NPP government’s investment in infrastructure projects, Dr. Bawumia said having realised the disproportionate allocation of infrastructure in the country, the Akufo-Addo government has, in its first term in office, pursued an agenda to ensure the even spread of amenities to accelerate growth at both the local and national levels.

“Infrastructure for all includes all the amenities that people need in order to unleash the potentials for growth in their communities, constituencies, and districts, and ultimately improve the conditions of everyday living. It also includes facilities and systems to support industrial and other economic activities,” Dr. Bawumia said.

The Vice President noted that historically, government infrastructure projects have been concentrated in the big cities at the expense of deprived communities, but the Akufo-Addo government has decided to leave no one behind as far as development is concerned.

“Historically, the provision of infrastructure has been concentrated in the big cities to the exclusion of the deprived and rural communities who lack basic infrastructure amenities.”

“To ensure equitable and inclusive growth, the provision of infrastructure amenities or facilities should not be dictated narrowly by our politics. Every community, district, and region deserves expanded opportunities for growth and improvements in their standard of living.”

“It should not be for government or politicians to decide on the sharing of infrastructure amenities on the basis of tribal, ideological, and political preferences.

EVIDENCE OF INFRASTRUCTURE FOR ALL

Vice President Bawumia gave a breakdown of all projects the government has undertaken, as well as their various stages of completion in key sectors such as education, health, roads, agriculture, digitization, sports water and sanitation, etc, in all regions.

“With our core policy to leave no district or constituency behind, we have steadily ensured that every constituency or district benefits from some basic infrastructure project,” he said.

“Over the past three and half years, we have implemented different infrastructure programmes across sectors: in total about 17,334 individual projects have been started since 2017.”

To demonstrate the indisputability of the projects the Akufo-Addo government has undertaken, Dr. Bawumia urged the media and the general public to independently verify on www.deliverytracker.gov.gh, a special website the government has created which contains all projects, sector, region, district, town as well as state of completion.