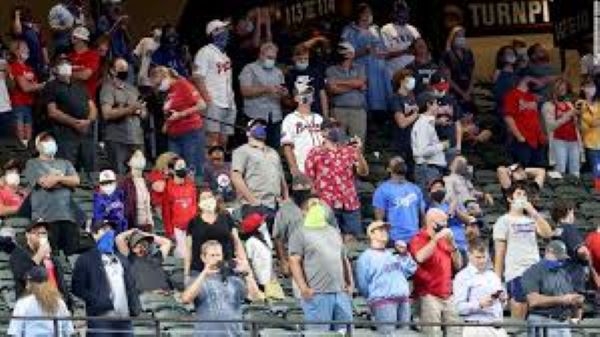 Spectators in a stadium

Instead of fake crowd noise, baseball stars are reacquainting themselves with some old friends — fans and the sounds they make.

For the first time since March, which was when the Major League Baseball shut down spring training because of the coronavirus pandemic, fans were able to watch their beloved MLB teams duke it out in person on Monday.

The fans’ return came on the same day that 33 US states recorded an increase in Covid-19 cases. The league had announced that approximately 11,500 tickets would be available for games at Globe Life Field in Arlington, Texas, the site for the National League Championship Series (NLCS) and the World Series.

And those 11,500 fans were sprinkled around the stands as the NLCS kicked off between the Atlanta Braves and the Los Angeles Dodgers.

The teams were tied at 1-1 in the top of the ninth inning when Austin Riley blasted a solo 448-foot home run to give the Braves a 2-1 lead. Atlanta would go on to win 5-1.

For the players, the return of the fans was “much needed,” according to Braves first baseman Freddie Freeman.

“We haven’t heard anything other than fake crowd noise,” Freeman said to reporters after the game. “This was much needed. It was great.

“Eleven thousand people, it really felt like 50,000 people to us because we haven’t had any all year.

Hopefully they were very happy for the first game of the 2020 season and hopefully they come out tomorrow and get another good show.”

‘It sure sounded like more’ While stadiums have been empty during the MLB regular season, elsewhere in the US, a limited number of fans have been permitted at certain NFL games.

Baseball in South Korea will see fans return for the first time in almost two months on Tuesday with around 20% of capacity, the Korea Baseball Organization announced.

Meanwhile in New Zealand, where the country’s handling of the pandemic has meant there are very few cases, 31,000 fans — who weren’t wearing masks — packed in to watch the All Blacks play Australia in the Bledisloe Cup.

For the second game of the series, a crowd of almost 47,000 is expected to pack into Auckland’s Eden Park on Sunday.

Monday’s game between the Braves and the Dodgers was the first 2020 playoff game with fans in the stands.

“I really noticed all the Braves fans. That was kind of cool,” Braves manager Brian Snitker told the media afterwards.

“I’m happy for the people here that were allowed to come in and experience this whole thing. I think it’s a great step in the right direction.

“I applaud Major League Baseball for all of us for what we’ve been through. People got to be happy with the product that they saw tonight. I’m going to tell you what. It was what, 11,000. It sure sounded like more. The people were into it, and good for them to be able to go to a ballgame and see a game of this caliber.”