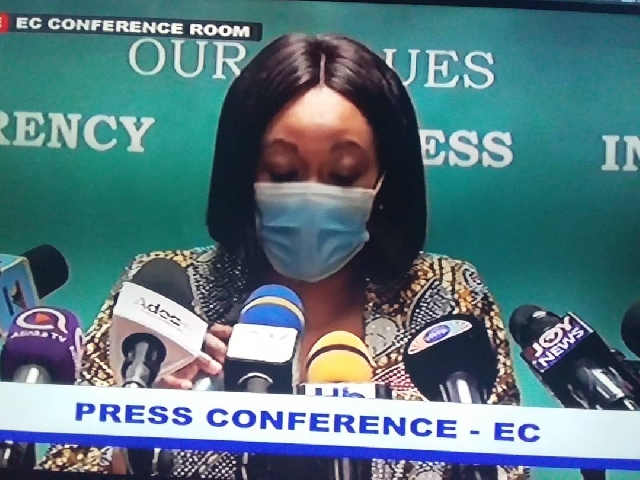 The Commission has, therefore, called on the public to disregard the video in circulation

The Electoral Commission (EC) has described a video circulating on social media, in which it is purported to have denied some security agencies the opportunity to take part in the upcoming special voting exercise for security personnel and the media, as “baseless and unfounded”.

The Commission has, therefore, called on the public to disregard the video in circulation.

A statement issued by the EC on Monday, 23 November 2020, said the Commission’s attention has been drawn to “a video circulating on social media claiming that the Electoral Commission has denied security agencies the opportunity to register and take part in the Early/Special Voting Exercise slated for Tuesday, 1 December 2020.”

The EC placed on record that “the contents of the video are false, baseless and unfounded” and called on the “general public to disregard the said video.”

According to the EC, in July 2020, it wrote to “all security and media agencies requesting them to submit the names of their officials who intend to vote under the Early/Special voting window.”

It noted that: “Following the receipt of the various lists, the Electoral Commission captured the details of applicants on the Special Voters Register.”

The EC, however, stated that “a few persons submitted wrong ID card numbers”, explaining: “Unfortunately, those persons were not reflected on the special voters register as their ID cards were invalid”.

“Some of these applicants submitted the ID numbers of the old voter ID card.”

The Commission indicated that the security agencies and media agencies were provided with soft copies of the special voters register following the finalisation of the register.

It added that it “provided evidence showing details of persons who were not included in the special voters register, as a result of invalid ID card numbers submitted to the Commission.”