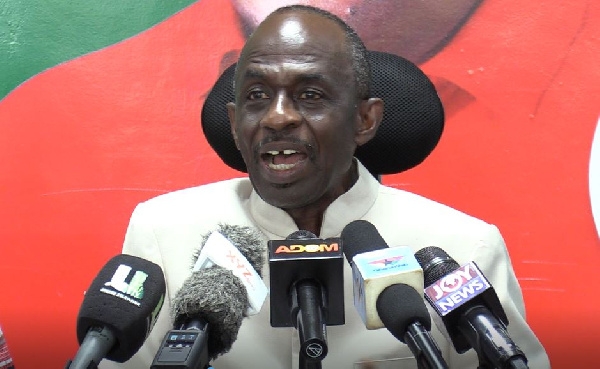 The governing New Patriotic Party (NPP), which touts itself as having learned and intelligent people is now plagiarising the 2020 manifesto ideas of the National Democratic Congress (NDC), which the incumbent party perceives as filled with dull minds, the General Secretary of the biggest opposition party has said.

At a town hall meeting in Kumasi, Ashanti Region on Tuesday, 15 September 2020 on the NDC’s manifesto, Mr Asiedu Nketia asked that “between a dump teacher and his students, who is dumber?”

Mr Asiedu Nketia also said if the Akufo-Addo government could not deliver in the more than three years that it has been in power, what could it achieve in the last three months of its administration with all the sod-cutting that is going on.

The town hall meeting came off just a day after the flagbearer of the NDC, former President John Mahama, had told Benjamin Akakpo in an exclusive interview on Class91.3FM’s Executive Breakfast Show it was good that President Nana Akufo-Addo and the NPP have started implementing the NDC’s manifesto.

He made reference to some major decisions taken recently by the Akufo-Addo government concerning the ban on the importation of accident cars, the use of motorbikes for commercial purposes (Okada) and the teacher licensure exam, to make his point.

“They’ve started implementing our manifesto, it’s a good thing”, Mr Mahama told Benjamin Akakpo, asking: “What are manifestos used for? They are meant to improve the lives of people and, so, if they’ve seen things in there, in our manifesto that are beneficial to policy today, they can start implementing them”.

On the ban on accident cars, Mr Mahama said: “We think that the Customs Amendment Act was done deliberately to give advantage to vehicle assembly plants”.

“Now, the point is: you don’t favour foreign vehicle assembly plants and disadvantage your own automotive industry”, Mr Mahama noted, explaining: “A lot of people depend, for employment, on the industry in Ghana; that’s the Abossey Okai, Suame, Kokompe and all of them and, so, you don’t pass a bill that says that: one, you’re going to ban the importation of salvaged cars and that you’re going to raise the import duty”.

He continued: “And, indeed, the most inimical one is the 35 per cent import duty on second-hand vehicles”.

“It means that it is going to make these vehicles so expensive that everybody is forced to buy from the vehicle assembly plant but these vehicles that come, they have minor scratches on them; something has happened to it, though it is not very serious and we have a very good, well-experienced industry where they are able to fix these vehicles and make them like new”.

“You’re not going to give all that up for some semi-assembly plant”, he said.

“I hear the vehicle comes almost complete. The only things that are not there are the tyres and the engines. That is not technology transfer”, he intimated.

In his view, “even if you send vehicles like that to Kokompe or Suame Magazine, they can fix them, so, all they do is they put the tyres on and they take a pulley and drop the engine and bolt it down and then you have a car, duty-free, and I hear that the number of models they are doing is restricted but you can order other VW models and they give it to you duty-free even though they are not assembling them, they are not putting them together here”.

Mr said so far, “what the government has said is that it has suspended implementation”.

“It doesn’t mean that they are taking legislation to Parliament to amend the legislation.

“So, they’ve only suspended implementation and well, anybody can surmise that: ‘Let’s wait after elections and after elections we’ll raise the suspension’. So, what the government should do is to go to Parliament and amend the Act in order to take care of the salvaged vehicles and the 35 per cent punitive tax on imported vehicles”.

On his promise to legalise Okada should he win the polls, Mr Mahama said: “As soon as I announced it, there was a lot of pushback from the NPP side but recently, I realised that the Transport Minister says they’ve started stakeholder consultation to see how to legalise and regulate it and make it safer and, so, if they are implementing that from our manifesto, that’s fine”.

As far as the licensure exam is concerned, Mr Mahama said: “We also talked about teacher licensure exam … because the teachers write the final-year exam and then shortly after they come out, you say they should come and write another exam”.

“We said: ‘Strengthen the final exam that they do so that you know that anybody who passes that exam is qualified to be a teacher.

“If you want to license, our proposal was to use an interview process to do the licensing but we left office before we could start and the NPP came into office and decided that the licensing should be by exam and that’s why we said, we will not use exam, we’ll use another method to do the licensing instead of exam and this year they’ve suspended the licensure exam, and, so, it looks like they are picking a lot of the issues in our manifesto”.