Obama pops up as virtual spectator at NBA finals 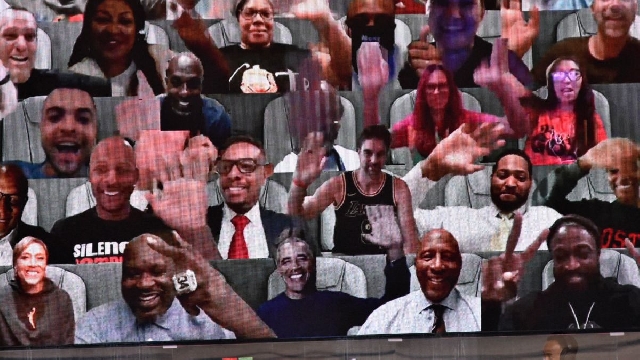 Obama spotted beneath the man in a red neck tie

Barack Obama is a huge hoops fan and there he was in the virtual crowd for Game 1 of the NBA Finals as the Los Angeles Lakers dominated an injury-plagued Miami Heat to take victory by a margin of 116-98.Due to the ongoing coronavirus pandemic, there have been no supporters at games inside the NBA ‘Bubble,’ but fans have been invited by the the league to watch matches on the Disney campus in real time and have their live reactions streamed and it’s become quite a phenomenon on social media.   Pre-pandemic, where famous faces were regularly seen in courtside seats, seperated by several rows and security guards from your ‘average Joe,’ in the virtual crowd aforementioned ‘Joe’ finds himself sat next to NBA Hall of Famer Shaquille O’Neal, or high-fiving Lil Wayne. One game saw Lakers’ virtual fans all sporting unibrows in honor of LA star Anthony Davis — a man nicknamed ‘The Brow’ for his famous unibrow.   Obama used his appearance in the star-studded crowd to thank poll workers participating in the upcoming elections.   In the video posted on social media the former US President said: “I wanted to come on to give a shout out to all the folks who are volunteering as poll workers in this upcoming election.   It can be a thankless job, it’s not one of those things you think about but it is absolutely vital for a democracy and I appreciate you.   “Democracy doesn’t work if just a few people do it, that’s like playing with half the team.” continued Obama, “but it’s only that way if people aren’t participating. If people get involved then we get the best of us and that’s what I’m hoping is going to happen.”   Anthony Davis (left) and LeBron James (right) made a combined 59 points, 22 rebounds and 14 assists in Game 1 of the NBA Finals.   It was the usual suspects doing the damage for the Lakers. Davis scored 34 points and nine rebounds, while LeBron James scored 25 points, made 13 rebounds and assisted his teammates nine times.   Miami weren’t helped by the loss of three starters to injury. NBA veteran Goran Dragic, and All-Stars Bam Adebayo and Jimmy Butler all left the court with injuries. Butler was able to return after an ankle injury but the damage to the Heat was done.   Dragic reportedly suffered a plantar fascia tear in his left foot, while Adebayo struggled with a recurrence of a shoulder injury picked up in the Eastern Conference Finals against the Boston Celtic.   Both players may be able to return for Game 2 on Friday though. Adebayo reportedly intends to play, while Dragic is said to have been able to put pressure on his injured foot when leaving the game.   The Heat opened up an early lead of 25-12 before a Davis-led Lakers’ pushback gave LA a lead they never gave up for the remainder of the game.   Underdogs Miami guarded the paint well early, but allowed the Lakers too much space to shoot. James and co took full advantage as they scored 65% of their attempts from behind the three-point line, scoring 12 of the Laker’s 15 three-point shots in the first half alone.   The Heat’s injuries hurt them badly, and by the end of the third quarter the Lakers led by 93-67. The Heat outscored their opponents in the final quarter, but it was too little, too late.   Despite the dominant performance, James wasn’t altogether happy with how the Lakers finished the game.