Okada legalisation threat to lives, livelihoods; drop it or we drop you – Drivers to Mahama 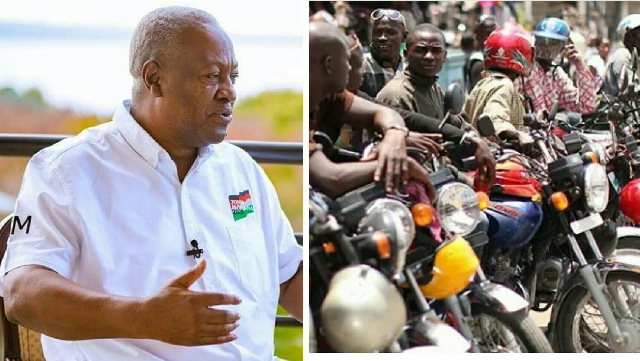 The National Concerned Drivers Association of Ghana has threatened to vote against the flagbearer of the opposition National Democratic Congress (NDC) if he fails to cancel his promise to legalise the operations of Okada riders across the country.

Former President John Mahama made the promise during his campaign tours.

It has also been captured in the party’s 2020 manifesto.

However, the National Concerned Drivers Association of Ghana has registered its displeasure about it.

In a statement issued by the association and co-signed by its National Secretary Nana Owiredu, Public Relations Officer (PRO) David Agboado and National Chairman Paa Willie, the group said it had “carefully studied the manifesto of the National Democratic Congress on the legalisation of Okada” and demanded that NDC take “a second look at their manifesto promise of the legalisation of Okada” in the country.

According to the association, “Okada legalisation is a threat to human livelihoods” as “the legalisation will not only endanger lives but rather create havoc and mayhem on the roads for both commercial and private drivers.”

The Association also noted that: “On our roads, Okada riders regularly break our tail lights, mirrors and, sometimes, scratch our cars and ride away leaving us to bear the cost”.

“Fellow Ghanaians, when we sit for the NDC to legalise Okada, then we are pushing for more road accidents and casualties on our roads.”

The group said “as an association, we are expecting the NDC to bring out solutions to curb the rampant casualties on our roads but not to add up problems”.

“Our livelihood comes from the roads, hence we cannot afford to support any attempt to make it unsafe for our passengers, ourselves and families. Statistics from the Ghana Highway authority indicates that the high rate of motorcycle accidents is claiming lives of breadwinners.”

It added that as an association, it has declared its “total rejection of the legalisation of Okada in Ghana” and called on all well-meaning Ghanaians to resist it, too.

Earlier, the Ghana Committed Drivers Association (GCDA) had kicked against former President John Mahama’s promise to legalise the Okada business (use of motorcycle for commercial purposes) should he be elected president again in the December 7 elections.

According to the drivers, the Okada business is in contravention of The Road Traffic Regulations, 2012 (LI 2180) sub-regulations 128 & 84, which expressly prohibits the use of motorcycle or tricycle for commercial passenger services.

Despite these laws, Mr Mahama, while on a campaign tour at Kpando in the Volta Region on Friday, 21 August 2020, promised the make the business legal.

He said: “I’ve been seeing young people who have finished school and they can’t find a job and, so, they are looking for something they can do and many of our young people are riding motorcycles and transporting people from place to place, and we call them Okada”.

Despite the resistance from the drivers, Mr Mahama has won the support of Okada riders with his promise.

“We call on our members and their dependents and clients and everyone who values the service we render to show up and vote massively for who has shown the care and not those who say one thing in opposition. And any other government that comes and is ready to support us, we’re ready to help them,” the Public Relations Officer (PRO) of the Greater Accra Regional Okada Operators Association, Setsoafia Pascal, said at a press conference in Ashaiman on Wednesday, 26 September 2020.

Reacting to this development in a statement, another group calling itself Committed Drivers, noted that: “The preposterous argument made by former President Mahama that Okada has come to stay, so, it should be legalised, must be treated with the contempt it deserves. Who made it come to stay?”

President Mahama cannot seek our votes to come back to power and tell us SAKAWA (internet fraud) is so pervasive and, therefore, must be legalised. Absolute drivel!” the drivers charged.

The drivers noted that Mr Mahama has stated his stance and they are waiting for what the current government will say on the subject matter.

“We have heard the former President Mahama. What is His Excellency President Nana Akufo-Addo’s take on this menace that is taking away lives needlessly? We keenly await his response with bated breath!”