“Only wicked people don’t pay back what they borrowed” – Agyinasare 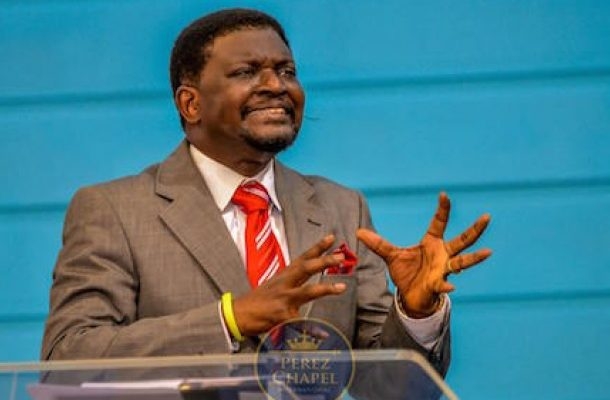 Anybody who borrows from another person and does not pay back, is a “wicked person”, Bishop Charles Agyinasare has said.

In a recent virtual sermon in which he taught his audience about poverty, wealth and rebuilding one’s life after COVID-19, the Presiding Bishop of Perez Chapel International said true Christians honour their debt obligations.

“Now, if you’re building your future, you have to learn to pay your debt”, he advised.

Quoting Psalm 37:21, which says: ‘The wicked borrow and never repay, but the godly are generous givers’, the founder of Perez Chapel International said: “It’s only wicked people who borrow and do not repay”.

“Righteous people will pay what they borrow”, he added.

“It’s important to remember that if you’re going to be a genuine Christian, a nobleman or woman, then you have to learn to repay your debt”, the man of God, who is known by many as the Nations’ Pastor, said.

He also taught the congregation to aspire to wealth and escape poverty.

“Wealth is not bad”, he said, adding: “In fact, the Bible has nothing good to say about poverty”.

“To be poor means to lack sufficient money or living below a level considered comfortable in society. And the Bible tells us that poverty destroys”, he said.

“In Proverbs 10:15, it says: ‘The wealth of the rich is their fortress; the poverty of the poor is their destruction’. There are many poor people who have died because they didn’t have the means to get a good surgery. Some are behind bars, in prison because they couldn’t have a good lawyer”, he pointed out.

Also, Bishop Agyinasare said: “Proverbs 19:4 tells us that poverty demeans. It says: ‘Wealth makes many ‘friends’; poverty drives them all away’. Poverty drives them away. When you have money, it attracts friends. When you are poor, people don’t even want you close to them all the time because they think you are coming to take from them all the time. Poverty reduces your influence in life.”

He buttressed that point with a biblical example from Eccl. 9:13 – 16: ‘9:13, ‘Here is another bit of wisdom that has impressed me as I have watched the way our world works. Eccl. 9:14 There was a small town with only a few people, and a great king came with his army and besieged it. Eccl. 9:15 A poor, wise man knew how to save the town, and, so, it was rescued. But afterwards, no one thought to thank him. Eccl. 9:16 So, even though wisdom is better than strength, those who are wise will be despised if they are poor. What they say will not be appreciated for long’.

“What they [poor people] say will not be appreciated for long. So, there’s nothing good about being poor. It is not wrong to be poor but it is wrong to stay poor”, he noted.

The Bible, he said, “tells us that poor people become slaves to rich people”.

“Prov. 22:7 says: ‘Just as the rich rule the poor, so the borrower is servant to the lender’. So, the rich rule over the poor. So, you don’t have to desire to remain poor. If you started out poor, that is why we preach the good news, so that God can lift you up”

He said investment is one of the ways to escape poverty. “Now, if poverty is not good and wealth is good, how do you get wealth? How do you build? By investment”.

Bishop Agyinasare quoted the New Living Translation version of Prov. 21:20, which says: ‘The wise have wealth and luxury, but fools spend whatever they get’ to make his point.

He recalled that as a little boy, his father opened a post office savings account for him, through which he nurtured his investment and saving habits.

“…I got saved and I realised in the Bible, Joseph taught Pharaoh that he was supposed to save 20 per cent of whatever he was going to get in the next seven years. So, I began to religiously save 20 per cent of every income I got. And, I would rather go hungry and save the 20 per cent after I had paid my tithe”.

Relying on the Moffats Translation of Proverbs 21:17, which says: ‘A man’s treatment of money is the most decisive test of his character, how he makes it and how he spends it’, Bishop Agyinasare said he took it upon himself to teach Christian youth about investment but lost steam on that front after the collapse of the financial sector a few years ago, of which he is a victim.

“Now, I went round this nation teaching these things in our Youth Explosions and encouraging young men to do investments. They should invest, at least, 20% of all their income like Joseph, in reputable financial institution and they were sure to get about 20 or 25% p.a.”

“Today, it’s difficult to do it because our financial institutions, you know, hallelujah, and, so, I can’t fully continue telling you how to invest your money because the Bank of Ghana can tell you that all your money you’ve invested, they’ll give you a five-year interest-free bond. I know, because me, too, for some [little] investment of mine, now I have to get a five-year interest-free bond, so, you don’t get anything from it”, he revealed.

He, however, pointed out that financial sector crisis is not limited to the current government.

“Now, all these financial institutions collapsing, it has been from NDC – DKM, to NPP, so, I’m not exonerating anybody. But if we want our youth – and under NDC, we had DKM and under NPP, we have all these multiple institutions, fund management firms, even some that are supposed to be security so that your provident fund [is secure], even all of them are being affected – so, for us, as a nation, if we want our youth to have confidence to do the right thing, our institutions must be working. Because Psalm 11: 13 says: ‘If the foundations are destroyed, what can the righteous do?’” he noted.

“If we want our youth to have confidence to do the right thing, our institutions must be seen to be working”, Bishop Agyinasare insisted.