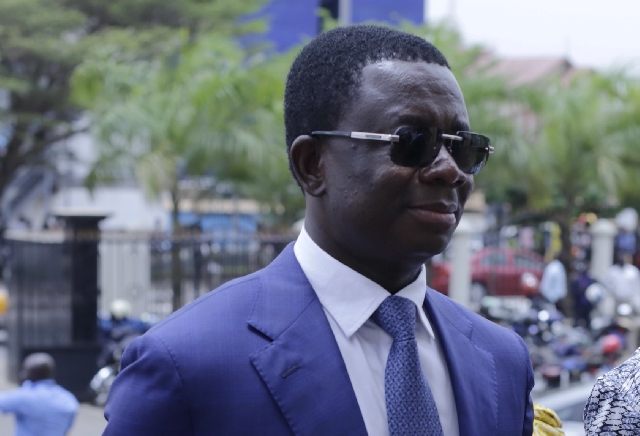 Dr Emmanuel Yaw Osei-Twum, a lecturer at the Chemistry Department of University of Ghana, who is the state’s 5th witness in the case involving former COCOBOD CEO Dr Stephen Opuni and businessman Seidu Agongo, is reeling under hefty punches from the defence counsel as they punch holes into his evidence.

Dr Osei-Twum appeared in court on Wednesday, 21 October 2020 to give an account of what he knows regarding an analytic test of lithovit fertiliser (which is at the centre of the trial).

It is recalled that the Economic and Organised Crime Office (EOCO), in May 2017, sent a sample of the lithovit fertiliser to the Chemistry Department of the University of Ghana for an analysis, ostensibly to determine the efficacy or otherwise of the product.

Giving his evidence in chief, Dr Osei-Twum noted that he and a lead scientist at the Chemistry Department of the University of Ghana, Professor Augustine Kwame Donkor, wrote the report, which has been admitted into evidence before the court.

He added that the Head of the Chemistry Department, Dr Luis Doamekpor, signed the report before it was forwarded to EOCO.

Asked whether he, indeed, wrote the report, Dr Osei-Twum said he and his other colleague (Prof Donkor) gathered data and formatted that data.

He, however, admitted that he personally did not write the report, as that was done by a secretary in the department.

Quizzed about whether he reviewed the report before it was signed and sent, he responded in the affirmative.

Mr Agongo’s lawyer then referred him to the Background Text of the report, which captured exactly what EOCO needed to be done on the sample and the purpose for that.

Dr Osei-Twum maintained that he had no idea the reason the analysis was due to an ongoing investigation into alleged procurement breaches at COCOBOD.

Mr Nutsukpui put it to the witness that: “You told this court Professor Donkor and yourself did write the report on which you have just testified”, to which Dr Osei-Twum answered: “We prepared the report”.

“So, when you say you prepared the report, is that different from writing the report”, Mr Nutsukpui followed up, to which the witness said: “Yes”.

When asked by the lawyer to “please tell the court what your preparation of the report means”, Dr Osei-Twum responded: “We put together the data, we formatted the data the way the report should be written”.

Pressed to be specific about “who, in fact, wrote this report?”, he said: “We have a secretary in the department who writes the report for us”.

Asked if he “reviewed” the report, he said: “Completely”.

In his response, Dr Osei-Twum said even though there is nothing to show that he and Prof Donkor worked on the sample, there is documentation that shows that the Chemistry Department worked on the report and submitted it.

Mr Cudjoe said: “I am putting it to you that if you had worked on the sample personally, you would have given a police statement”.

Dr Osei-Twum answered: “At the time we analysed the sample, we were dealing with EOCO. EOCO never indicated to us that it had anything to do with criminality. We were only asked to analyse the sample”.

Asked: “Did you download the MSDS or you got it from EOCO?”, the witness said: “We got a copy from EOCO”.

Mr Cudjoe then confronted him thus: “You were untruthful to this court when you told this court that EOCO never briefed you about any criminality concerning the procurement of lithovit”.

Dr Osei-Twum answered: “My lord, I am chemist, not a lawyer, I have nothing to do with the law. Prof Donkor and myself didn’t sit down to discuss the criminality associated with the sample that EOCO submitted to us, so, I have not lied to the court”.

“I am putting it to you that EOCO briefed the Department of Chemistry about the fact that it was conducting investigation into the procurement of lithovit and it wanted the department to test the lithovit fertiliser”, Mr Cudjoe insisted, to which Dr Osei-Twum retorted: “If EOCO briefed anyone, it would have been my head of department and I am not aware”.