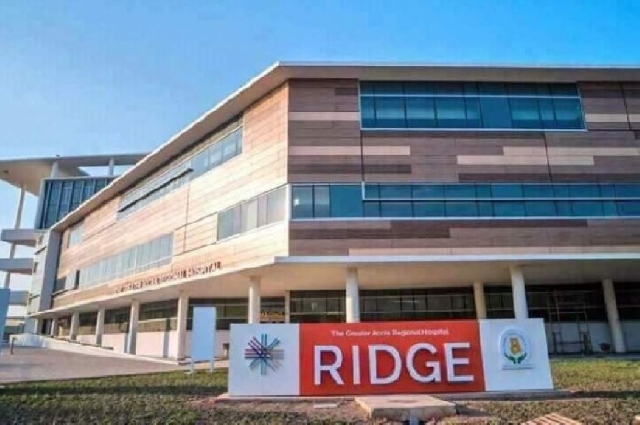 Director of the Ghana Institute of Languages (GIL) Dr Emmanuel Kuto has sued the Ghana Health Service (GHS) and the Medical Director of the Greater Accra Regional Hospital (GARH) praying an Accra High Court to grant an order of mandamus to compel them to release the medical records of his late wife Esther Kafui Sosuh.

Dr Kuto also wants the court to stop the GHS and the Medical Director of the GARH from conducting any autopsy on his wife pending the final determination of his suit against them.

Dr Kuto has accused the hospital of negligence leading to the death of his wife at the facility.

According to Dr Kuto, his wife died at GARH after she had been given a wrong prescription by a doctor while she was on admission.

He recalled in a statement he put on Facebook that he heard a conversation between a doctor rebuking his colleague doctor over the phone for prescribing a wrong medication for his deceased wife.

The management of GARH responded by saying that it would conduct an investigation into the events that led to the death of the GIL Director’s wife.

But Dr Kuto later said instead of resolving the case amicably, the hospital’s management attempted bullying him to drop the case.

Following a series of meetings with the management of the hospital, Dr Kuto, in a press statement released on Friday, 3 July 2020, noted that: “We were invited by Dr Emmanuel Srofenyoh, the Medical Director of the Greater Accra Regional Hospital (also known as Ridge Hospital) to appear before a committee set up to investigate the circumstances leading to the demise of my wife, Esther Sosuh.”

The parties, after some initial disagreements, agreed that “GARH had failed to officially notify the husband and family of the deceased. GARH had also failed to debrief the husband and family per established protocol. As of the time of the meeting, that had still not been done; there was the need to conduct an autopsy on the body of Esther Sosuh in order to establish the cause of death, to make the findings of the proposed autopsy meaningful to the husband and family of the deceased, it was imperative for GARH to make available to them all relevant documents in respect of Esther Sosuh, from pre-surgery consultations to death.”

Also, “to enable the husband of the deceased, give a meaningful testimony before the investigative committee, it was imperative for GARH to make available to him all relevant documents in respect of Esther Sosuh, from pre-surgery consultations till death”.

It was also agreed that husband of the deceased “should put in a formal written request to GARH to enable it to release the documents to, following the release of the documents, Dr Kuto would pick a coroner’s form and proceed to report the case to the police and would then sign the consent form for the autopsy to proceed.”

“A few hours later, GARH, through its Medical Director, informed Dr Kuto by phone that they had been advised by their lawyers not to release the documents that GARH had undertaken at the meeting. At the same time, the Medical Director wanted Dr Kuto to sign a consent form authorising the autopsy to proceed” to which the latter declined.

Explaining what this meant to him in an interview with Class News, Dr Kuto described the action by the management of GARH as incredible.

He said: “I’ll be meeting my lawyers on Monday. I had wanted us to stay out of court because I really didn’t want to go this way. My priority was to make sure that things change at Ridge Hospital. I told them that what happened doesn’t do them any good at all. Their image has been terribly damaged because the story has gone around the world”.

He added that: “I was willing to help them resolve this thing more or less peacefully but now they are on the offensive, so, I have no choice but also go and seek legal redress. Now, we’re totally deadlocked. Yesterday, the Medical Director called me trying to pressure me into signing the forms. When I said no, he said: ‘Oh, you, we know what you’re doing, you are doing delaying tactics and you’re trying to tarnish my reputation. God who is in heaven is watching you’. At this time, all my pent-up emotions simply blew up and I just hang up on him. So, that is where we are now. They’re actually trying to bully me, incredible.”