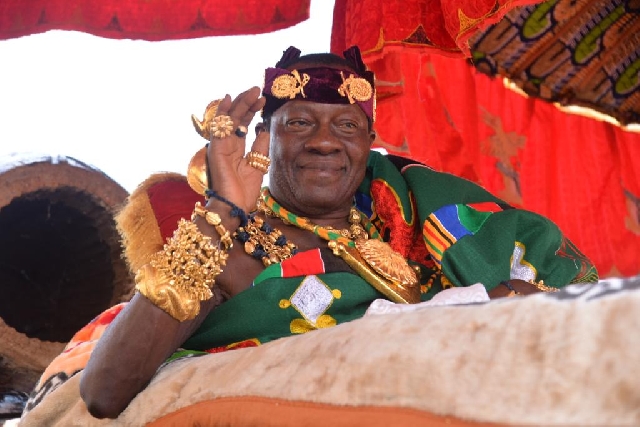 The Omanhene of New Juaben, who is also the Chancellor of All Nations University, Daasebre Professor (Emeritus) Oti Boateng, has put together a five-page paper detailing a regional impact assessment of the COVID-19 pandemic in Ghana.

Known as The Yiadom Index for COVID-19 Regional Impact Assessment in Ghana, the former Government Statistician introduced it to assess the relative impact of COVID-19 on different regions in Ghana.

In the course of analysing COVID-19 data collected from the Ghana Health Service, Ministry of Health, the chief developed a methodology for measuring the regional impact of the pandemic in the country.

The technical details of this methodology, including the procedure for testing the reliability of the results, were published on 12 August 2020.

Below is the full Yiadom Index:

THE YIADOM INDEX FOR COVID-19 REGIONAL IMPACT ASSESSMENT IN GHANA

The human scourge of COVID-19 pandemic, first reported to the World Health Organization (WHO) in December 2019, continues with undiminished intensity. Globally. there have been over 25 million confirmed cases of COVID-19 reported by the WHO including over 840,000 deaths as of 31st August 2020. According to the WHO data, Africa has over 1.2 million reported cases with nearly 29,000 confirmed deaths within the same period. By 31st August 2020, Ghana had recorded 44,298 COVID-19 cases with 276 confirmed deaths.

This paper introduces a new index, the Yiadom Index, for assessing the relative impact of COVID-19 on different regions in Ghana. In the course of analysing COVID-19 data collected from the Ghana Health Service, Ministry of Health, the writer has developed a methodology for measuring the regional impact of the pandemic in the country.

The technical details of this methodology, including the procedure for testing the reliability of the results, were published on Ghanaweb on 12 August 2020.

The index derived from the application of the methodology is now referred to as the Yiadom Index.

The Yiadom Index for COVID-19 regional impact assessment is a composite index derived from the share of a region in the latest national population census and the corresponding share in the cumulative reported cases of COVID-19.

At any given point in time, the Yiadom Index is obtained from the percentage points differential between a region’s population share and the corresponding COVID-19 share.

For example, for Central Region, the population share is 8.93 per cent (from the 2010 census data) while the COVID-19 share in August 2020 is 4.23 per cent (based on the cumulative reported cases for that month) thus giving a percentage points differential of 4.7 which is the Yiadom Index for the Region in August.

The Yiadom Index of 4.7 for the Central Region is a numerical scale by which the Region can be compared with other Regions in the country. A positive Yiadom Index implies a relatively better COVID-19 impact compared to a negative Index. Some practical applications of the Yiadom Index, particularly its utility in assisting policy initiatives to prevent the spread of the disease and save lives, will now be considered.

Table 1.0 provides comparative results of the Yiadom Index measures for the regions of Ghana in July and August 2020.

Since the methodology requires a regional population share during the latest census in 2010, the four regions which were affected by the creation of new regions in 2018, namely, Northern, Western, Volta and Brong Ahafo, have been pulled together for analytical purposes to make the analysis complete. The reliability of the July and August index measures is established by the fact that all the regional indices for both July and August add up to zero as shown in the Table.

Two regions which recorded negative Yiadom Index measures were Greater Accra Region with an index of -33.53 and Ashanti Region with an index of -5.09. The reliability of the Yiadom Index measures for the regions is attested by the fact that the total values of the eight regions in the positive zone, 38.6, and the total of the two regions in the negative zone, -38.6, add up to zero thus satisfying the invariance condition of the methodology.

Chart 1.1 provides a visual illustration with graphs depicting the population share as blue and COVID-19 share as red. It is easily seen from the graphs that the blue line representing the population share is above the red line representing COVID-19 share in the case of the eight regions with positive Yiadom index whereas in the case of the two regions with negative Yiadom index, the reverse is the case.

Chart 1.3 presents a graphic example of the Yiadom Index for COVID-19 regional impact assessment in for July and August 2020. For each region, the bar on the left represents the Yiadom index for July while the bar on the right represents the index for August 2020. The regions are arranged in order of magnitude of the respective Yiadom Index for August. This results in the sequential ranking of the regions with the August Yiadom Index values as follows: Northern including North East and Savannah, 8.69; Volta including Oti, 6.57; Eastern, 5.5; Brong Ahafo, comprising Bono, Ahafo and BonoEast, 5.35; Central, 4.7; Upper East, 3.6; Upper West, 2.65; Western including Western North, 1.58; Ashanti, -5.07 and Greater Accra, -33.53. The Chart reveals that the bars for all the eight regions with positive Yiadom Index are shown above the x-axis in the first quadrant while the bars for the two regions with negative index are shown below the x-axis in the fourth quadrant.

Advantages of the Yiadom Index

The Yiadom Index has several advantages. It serves as a measuring scale for determining COVID-19 impact on the various regions of the country thereby allowing comparisons to be made between them. It provides timely and reliable data to permit appropriate response interventions to enhance the pandemic control programmes. In this way, it contributes to the effort to stop the spread of the pandemic and save lives. It is also used to monitor and evaluate the trend of the pandemic in the country and across the regions. Again, it facilitates the prioritization of policy initiatives in a cost-effective manner to redirect attention to where it is most needed.

Furthermore, it assists in health promotion by empowering individuals and communities to choose healthy behaviours that reduce the risk of developing chronic diseases and other morbidities. For example, the results of the Root-Based survey conducted in New Juaben in February 2020 revealed that the four main diseases afflicting the communities were malaria, cholera, typhoid and measles which together account for nearly 92 percent of the total responses. Armed with such information, the Root-Based institutional members, who formed a volunteer group to disseminate vital information on COVID-19 safety protocols in their respective communities, were also instructed to educate the communities on the need to control the spread of the four diseases as well. This mechanism did not only serve as a powerful catalyst for health promotion but also allowed for broad citizens’ involvement to ensure optimal outcomes.

The pandemic won’t be controlled in the country until it is controlled in all the regions therein. That’s why it’s a matter of crucial importance and national interest to involve the citizens at the community level in all the regions. Without the citizens inclusion, the pandemic will persist longer than it otherwise would, and the nation will bear the unwarranted consequences. Communities across the country should therefore be encouraged to form volunteer groups similar to the Root-Based ones for the purpose of assisting to fight the pandemic in their respective communities.

It is strongly recommended that the country adopts a holistic national health promotion strategy that would involve the citizens at the community level. This health promotion strategy should cover both COVID-19 and malaria which is endemic and perennial in all parts of Ghana. This dual approach is considered necessary because according to the latest Ghana Health Service data on causes of hospital admissions in the country, nearly 25 percent (24.27%) of all causes of hospital admissions in 2017 were due to malaria. Such a programme will, therefore, provide a cost-effective way to manage both COVID-19 and malaria in the country.

Health promotion, as defined by the World Health Organization, “enables people to increase control over their own health. It covers a wide range of social and environmental interventions that are designed to benefit and protect individual people’s health and quality of life by addressing and preventing the root causes of ill health, not just focusing on treatment and cure.” Thus, health promotion helps to break the pathway of disease transmission as it improves wellness and individual decisions that contribute to positive health behaviours and outcomes.  Government and the private sector are expected to support this community volunteer building initiative for health promotion while the Ministry of Health is expected to liaise with the volunteer groups to operationalise the strategy.

A high degree of community involvement is considered critical in determining, to a large extent, the public acceptance and proper use of the hygienic protocols to optimise the preventive intervention outcomes of COVID-19 and malaria.

It is hoped that the relevant stakeholders will adopt the Yiadom Index and associated recommendations to help in moving Ghana’s health profile on a higher pedestal.

Omanhene of New Juaben, Chancellor of All Nations University and former Government Statistician.