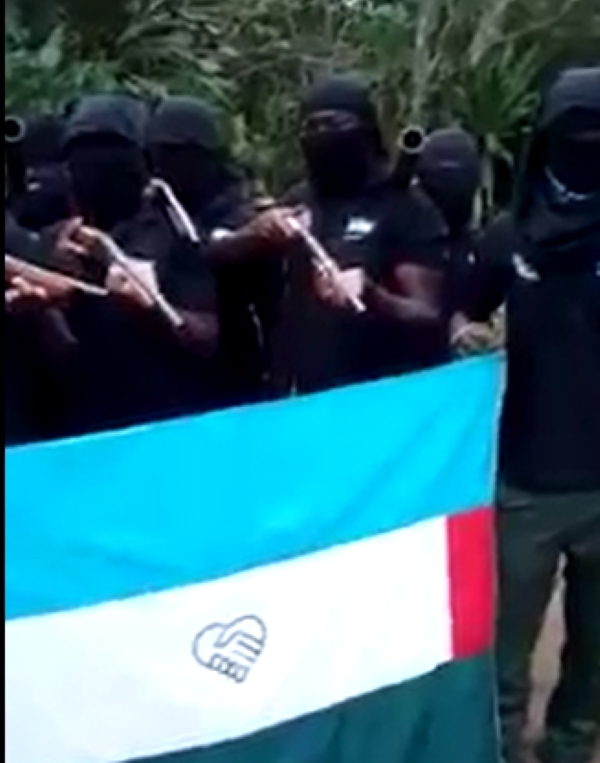 The group sent the message via video

A group calling itself the Dragons of Western Togoland military army has sent a note of caution to Energy Minister John Peter Amewu, Volta Regional Minister Archibald Yao Letsa and the MP for North Tongu, Mr Samuel Okudzeto Ablakwa, that it will move to claim “the motherland” in the next 21 days.

The group sent the message via video.

In the video, masked gun-wielding men wearing black shirts on dark-green trousers are seen standing in formation behind their secessionist flag.

A male voice is heard giving a detailed account of their mission and purpose.

The group said it has 4,300 men trained in a neighbouring country to invade parts of the Volta Region to claim their motherland.

“About 4,300 Dragons are trained in a nearby country; they’re ready to enter into their motherland, Western Togoland. They’re not rebels, they’re not militants. They’re well-, fully-trained soldiers, so, nobody should be afraid of them. They’re coming to deliver their motherland, Togoland”, the male commanding voice is heard saying.

He continued: “They’re the ones who will rescue their motherland from the hands of the slave masters.

“They’ve been a slave to the Gold Coast, Ghana for years; they are not militants. What’s annoying them is that the people of Gold Coast, Ghana, are arresting their people for no reason. They’re shooting people and several people have been injured. About 4,000-plus persons have been trained in another country to rescue their motherland,” the voice said.

The group further appealed to the chiefs and leaders of the various communities in the Volta Region, not to be deceived by anyone who offers them money, in cedis or naira, to work against their mission.

“Those of you chiefs claiming not to be part of this movement, when the independence comes, can you endure it? The Dragons are coming”, the tape said.

The group added: “We’re giving you, John Peter Amewu, Archibald Letsa Yao, Okudzeto Ablakwa, prior notice. The Dragons, together with Gorillas, will enter the land after 21 days to claim the state. The Gorillas, together with Dragons, are merging to deliver their motherland, Western Togoland.”

Class News’ Volta regional correspondent, Albert Kuzor, reported that armed security personnel are on guard at the various government institutions in the region, including the ministries, STC yard and the market.

The army personnel were deployed to the region after some recent violent separatist activities.

About a week ago, the leader of secessionist group Homeland Study Group Foundation (HSGF), Mr Charles Kormi Kudzordzi, popularly known as Papavi, released a video message denying any involvement whatsoever of the group in the recent violence staged by people purporting to be Western Togolanders.