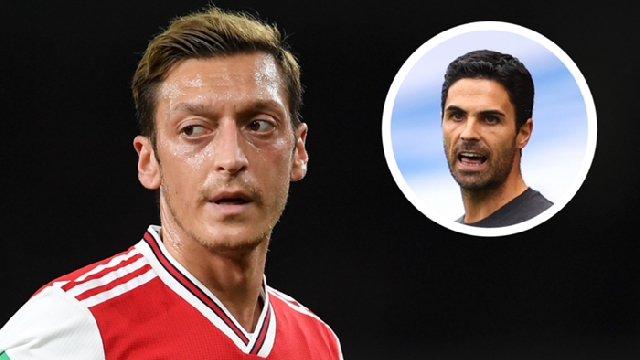 The former Gunners frontman can appreciate why a World Cup winner has been frozen out, with questions being asked of a divisive character

Mesut Ozil’s unfortunate situation at Arsenal is “sad”, says Alan Smith, with the World Cup winner becoming a “wasted talent” that could have achieved so much more.

A 32-year-old playmaker that has graced the very top of the game in his distinguished career is now little more than an expensive luxury at Emirates Stadium.

Ozil has been omitted from the Gunners’ Europa League and Premier League squads for 2020-21, making it highly unlikely that he will figure for the club again.

He has already been frozen out since March and will see a lucrative contract come to an end next summer.

Smith is among those left baffled as to how such a situation could play out, with a man who boasts obvious ability paying the price for not toeing the line under Mikel Arteta.

The former Arsenal striker told Sky Sports: “It’s sad, there’s no doubt about it because it’s a wasted talent and has been for the last couple of years. He hasn’t reached the levels that he did, four or five years back.

“I can’t remember a time in football when someone on so much money has been ostracised like this and has no chance at all of playing for the first team.

“But Mikel Arteta has made his choice and obviously knows things that we don’t. He’s looked at the player day in, day out.

“It might be down to his attitude during lockdown when he refused to take a wage cut, and he didn’t take part in team Zoom meetings so perhaps Arteta feels he’s not a team player.

“The irony is that Arsenal do need a player of that ilk at the moment, someone of Ozil’s creative force. Somebody who can unlock defences as they’ve faced a couple of those challenges recently against West Ham and Sheffield United and it was difficult for them.

“I’m sure Arteta would’ve liked to have had the Ozil of four or five years back available. I would say Arteta wields quite a lot of power there, and obviously his title changed, so I’m not sure this is a decision that has been taken out of his hands.

“With the narrowing down of the powers there with Raul Sanllehi going, Arteta – along with the director of football Edu – does call a lot of the shots.

“From Ozil’s point of view, this period where he’s sat tight on his contract and he’s refused to countenance a move, at the end of his career he will reflect on it being three or four years wasted.

“You only really can appreciate that at the end of your career, so from a personal point of view, he really should’ve tried to find a career elsewhere. He’s got to wait until January now, and with that then being so close to next summer, I would doubt he’ll agree to a move.

“Arteta has made his decision very clear indeed, and nobody will be asking him in the forthcoming press conferences ‘why isn’t Ozil involved?’. He’s drawn a line in the sand and he’ll be hoping to move forward.”

Ozil, who became Arsenal’s record signing when joining from Real Madrid in 2013, has taken in 254 appearances for the Gunners, registering 44 goals and 77 assists.