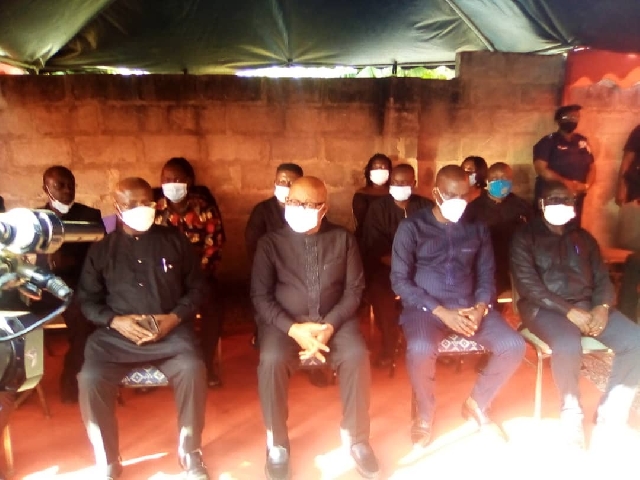 A delegation from Parliament, led by the Speaker, Prof Mike Oquaye, has visited the family of the slain MP for Mfantseman, Ekow Hayford.

Majority Leader Osei Kyei-Mensah-Bonsu and Minority Leader Haruna Iddrisu were part of the delegation that went to the Central Region on Monday, 12 October 2020.

Mr Francis Ato Cudjoe, MP for Ekumfi, briefed the deceased family about the visit of the parliamentary delegation.

Mr Hayford was killed on Friday, 9 October 2020 at dawn by alleged armed robbers while returning from a campaign trip.

The MPs, on Friday, called for swift investigations into the events that led to the shooting and killing of their colleague.

In a statement issued by the Parliamentary Service Board and signed by Director of Public Affairs, Kate Addo, the house of legislature expressed its shock at the murder of the MP.

“Parliament is shocked and extremely saddened by the gruesome murder of the Member of Parliament for Mfantseman,” the statement said.

It noted: “The first time Member of Parliament served on the Judiciary Committee and the Defence and Interior Committee.”

The house described the late MP as a “quiet, hardworking man, who did his job diligently with very little fuss.”

The statement continued: “The Speaker and members, while mourning the loss of their colleague, have expressed the hope for expedited action to find and bring the perpetrators of this heinous crime to book.”

The house of legislature further expressed its condolences to the wife, children, family and constituents of the late MP.

Meanwhile, President Nana Akufo-Addo has assured Parliament that the law enforcement agencies are doing everything possible to arrest the killers.

In a communiqué to Parliament read by Speaker Prof Mike Oquaye on Friday, 9 October 2020, the President said: “It’s a very sad day for all of us and I want to assure you, Mr Speaker and Members of the House that every effort will be made by the law enforcement agencies to apprehend, quickly, the perpetrators of this heinous crime”.

“I want to reassure you further that the government will continue to take and intensify all appropriate measures to guarantee the safety of Members and citizens of our country as we all go about our lawful duties, especially during this period of democratic [accountability].

“May God bless the members of parliament and us all and may God bless our homeland Ghana and make us great and strong”, the President noted.