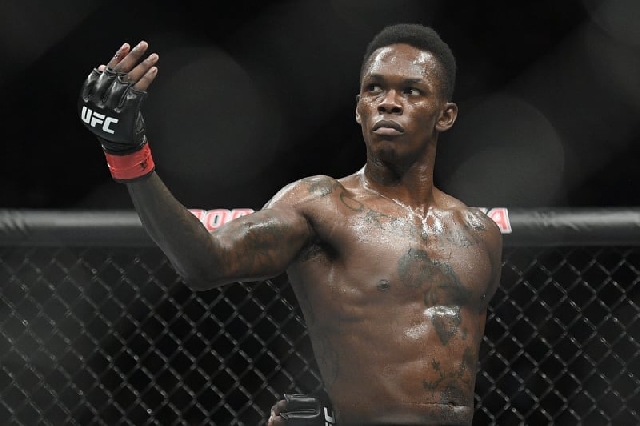 Any significant achievement in sports is worth celebrating. NFL stars dance after scoring touchdowns, MLB players flip their bats after they blast home runs and UFC fighters dry hump their vanquished opponents.

Israel Adesanya took his UFC 253 celebration(s) a step too far after putting on a clinic against previously unbeaten Paulo Costa in their much-anticipated pay-per-view main event on Saturday in Abu Dhabi.

The middleweight champion delivered precision kick after kick before catching Costa in the second round with a powerful left hook that knocked the Brazilian down. “The Last Stylebender” quickly pounced and delivered several ground and pound punches before referee Jason Herzog stopped the fight. In that moment, perhaps feeling the rush of having successfully defended his undisputed middleweight title a second time against the No. 1 contender, Adesanya sprang back to stand up, but held on to Costa and thrusted the air behind his injured opponent.

A dazed Costa sat on the Octagon floor for several minutes trying to regain his wits and get the strength to stand on his battered legs. Meanwhile, Adesanya sprinted around the cage a la Naruto (a Japanese anime the Nigerian-born frequently references) and then began breakdancing like an extra on “Beat Street.” As if that wasn’t enough, Adesanya then proceeded to tell Costa’s cornermen that he’d …. well, let’s just leave that to Adesanya to explain:

On Monday, nearly two full days after his first career loss, Costa took to Instagram to call out the champion for his post-fight actions.

“I come here to talk about the action that the human trash did after our fight,” Costa said in a video posted to his Instagram. “I didn’t see when I was there in the cage but I saw now. I disapprove 100 percent. To me, this is [personal] now. Nobody will stop me. Nobody can stop me.

“I want my rematch. You know I am waiting for you. Something happened before the fight, I’m not [making] excuse here to my people, to my fans but I will be 100 percent to fight him and to make him pay. That’s my words. Save my words.”

Adesanya quickly caught wind of Costa’s post and responded in his comments.

“I can stop you again,” Adesanya wrote to Costa. “Dislike.”