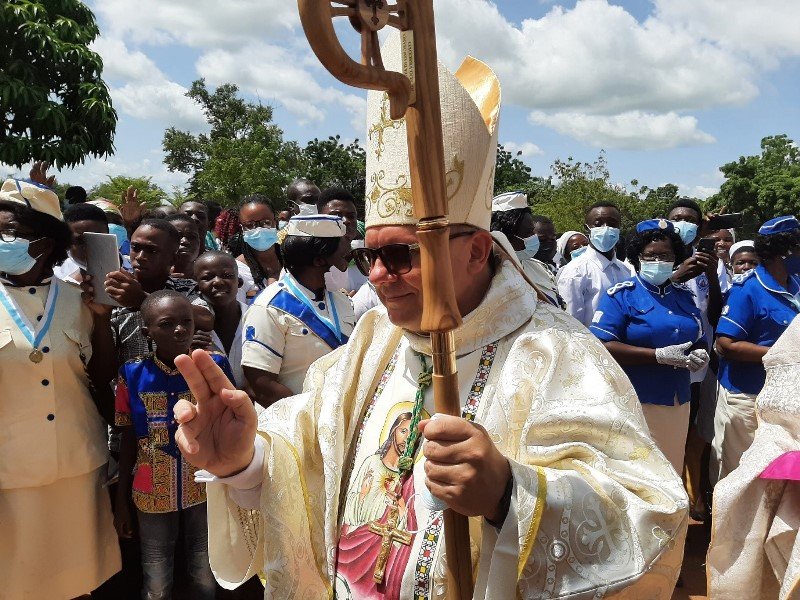 Most Reverend Henryk Mieczyslaw Jagodzinski, the Apostolic Nuncio to Ghana, says with perseverance and trust in God, Christians will achieve holiness.

He said the Virgin Mary, the mother of Jesus Christ suffered more than anyone else, “She may not have fully understood what was going on in her life and in the life of Jesus Christ but she persevered and trusted God, likewise we too can achieve holiness,” Most Reverend Jagodzinski said.

The Apostolic Nuncio said this in a sermon at the end of the Centenary celebration of the Our Lady of Seven Sorrows Minor Basilica in Navrongo.

He said next to the cross of Jesus stood His mother, who courageously suffered with her son for the salvation of the world, explaining that “The symbol of the sorrow is the control over evil tendencies.”

He said the name of the Basilica, Our Lady of Seven Sorrows, had great theological depth, and noted that for many centuries, the Church had celebrated two feasts, to commemorate the sufferings of the Blessed Virgin Mary.

Most Reverend Jagodzinski mentioned the Friday before Palm Sunday which was the feast of Our Lady of Sorrows and September 15 as the Seven Sorrows of Mary.

He explained that even though both feasts were parallel to the feast of the passion of Jesus Christ, they were to some extent equivalent, “The first feast is directly connected with the Holy week and the second with solemnity of exultation of the Holy Cross.”

He noted that the death of Jesus Christ on Mount Calvary was not ordinary, as He was tortured to death as a sacrifice to save mankind.

In his address prior to the sermon, Bishop of the Navrongo-Bolgatanga Diocese, Most Reverend Alfred Agyenta recalled the many clergy who were ordained, and the countless number of Christians whose final journeys on earth were concluded since the construction of the Minor Basilica.

“We thank God for the gift of this singular sacred building which is a symbol of the body of Christ not made of brick and water but of the living souls of each individual member of His mystical body.

“We pray that as living souls, we will continue to allow ourselves to be used as building blocks for the construction of the Kingdom of God in our society and in the nation as a whole,” Bishop Agyenta said.

The Vice President, Alhaji Dr Mahamudu Bawumia, in a speech delivered on his behalf by Mr John Peter Amewu, the Minister of Railways Development, said the centenary celebration of the Church was time for them to take stock of how far the Church had gone.

“While you take stock, I expect that you are already planning for the future. This should include a maintenance plan with new ideas and strategies on how to enhance this House of God. Through regular maintenance, the traditional architecture will be sustained.

“It is on this note that I commend the Basilica Maintenance Committee for the good work and urge them to keep at it. Aim to boost the tourism potential of not only the church, but the locality,” Dr Bawumia added.

He encouraged the Ministry of Tourism, Arts and Culture, and the Ghana Museums and Monuments Board to collaborate and assist the Committee in-charge of the maintenance of the Minor Basilica to protect “this national heritage.”