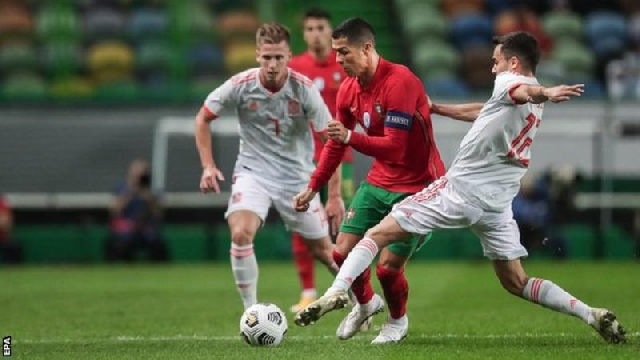 Cristiano Ronaldo could not add to his 101 international goals

Portugal twice hit the crossbar but could not find a breakthrough in a goalless friendly against Spain.

Juventus forward Cristiano Ronaldo rattled the bar in the second half, with Renato Sanches’ fierce strike also smashing the underside of the woodwork.

Spain were dominant in the first half but Leeds’ Rodrigo curled wide and Dani Olmo struck straight at Rui Patricio.

The match was played in front of 2,500 spectators at Sporting Lisbon’s 50,000-capacity Jose Alvalade stadium.

The two teams were meeting for the first time since the 2018 World Cup when they shared a thrilling 3-3 draw in which Ronaldo netted a hat-trick, but this encounter never threatened such drama.

Wolves winger Adama Traore made his debut for Spain in the second half and he almost created a goal but Olmo’s strike from the cutback was saved by Patricio.

At the other end, Chelsea goalkeeper Kepa Arrizabalaga made a good save to deny Joao Felix’s effort.

Sergio Ramos came on for his 173rd international appearance and could have won it for Spain late on but was unable to direct his header on target.