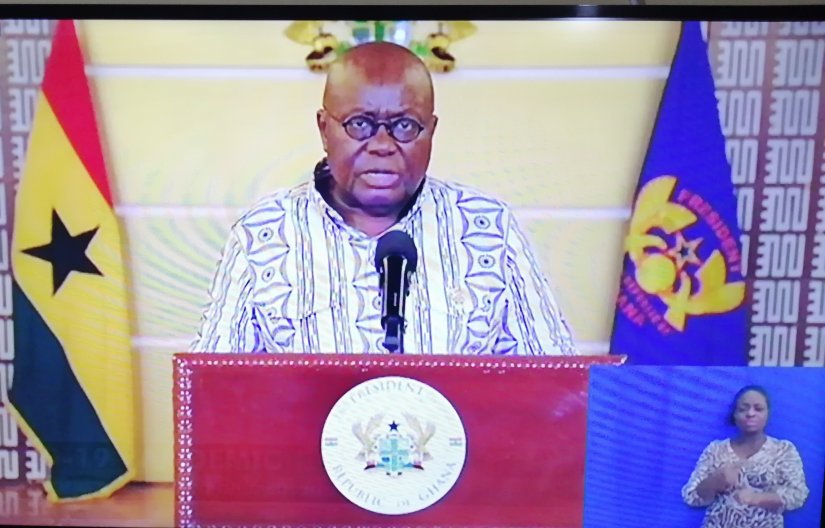 “I want, at the outset, to thank all of you for your prayers and expressions of good wishes when doctors advised me to go into quarantine for two weeks,” President Akufo-Addo said this in his 14th broadcast to the nation on measures taken by the Government to combat the spread of the Coronavirus.

“God being so good, I am back again at work. I thank you very much for your concern.”

He said that it had been almost five months since the lives of Ghanaians were turned upside down, and, indeed, the whole world was forced into a crisis of unimaginable proportions.

He said the crisis, which had dramatically affected lives and livelihoods, had plunged the world into unchartered waters, as even the experts admitted that they were having to learn as they went along.

“This new, unknown virus has led the world and its economies to a violent halt, and has brought death and fear into our lives,” he stated.

“We, in Ghana, rose to the occasion, and introduced measures to protect lives and livelihoods.”

He said back in March, most Ghanaians hoped passionately that the effects of the virus would wane quickly, once they took the steps that had been recommended to contain the spread.

He noted that even the most hard-headed expert opinion suggested that, by the middle of the year, the spread of the virus would be on the wane.

“We are now at the end of July. The virus is still raging. There is not an effective treatment yet. As time goes on, we – and, indeed, the world – have come to understand that COVID-19 is not a problem, which will go away on its own.”

The President said ultimately, salvation would come with an effective and accessible treatment.

He said until treatment was found, COVID-19 would remain a part of our lives; adding that “but life cannot be put on hold indefinitely, and Ghana cannot remain in a never-ending crisis management situation, and that is why we have been putting measures in place to restore gradually some normalcy in our social and economic lives, as we learn to cope with the reality of the virus”.