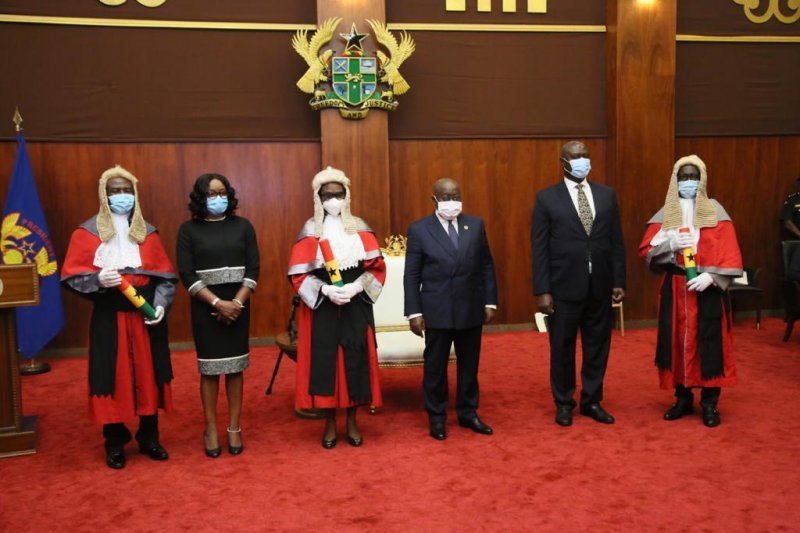 He said it was comforting that the leadership of institutions of the state- Executive, Legislature, and Judiciary- with due regard to COVID-19 safety protocols, were providing the requisite leadership to steer the population through the crisis that had wreaked havoc on the lives and livelihoods of people.

“It is a reassuring development for the Ghanaian people,” he said, after he swore five high court judges and the Judicial Secretery into office as Appeal Court Justices, at separate ceremonies, at the Jubilee House, Accra.

They swore to the Judicial, Secrecy, and Allegiance oaths, administered by the President.

Congratulating them on their appointments, the President described them as “eminently fit and qualified for the position of Justices of the Court of Appeal,” saying they had the impartiality of mind and independence of spirit to hold the high office.

He reminded them that as justices of the superior court of adjudicature, the 1992 Constitution placed on them the onerous responsibility to protect and defend the individual liberties and fundamental human rights of citizens, and promote the orderly development of the country.

President Akufo-Addo exhorted the judges to continually stand by their oaths to dispense justice and apply the laws of the land without fear or favour, affection or ill will, and without recourse to the political, religious or ethnic affiliation of any citizen.

He emphasised that the growth of the nation demanded a judiciary that commanded the respect of the people by the nature of its delivery of justice and by the comportment of its judges.

“It is vitally important that we have judges who are honest, possess integrity, and sound knowledge of the law….,” he said.

“When a person falls foul of the law, we expect the person to be dealt with accordingly and the law enforcement agencies, including the superior courts of adjudicature, must ensure this is done.

“We cannot have the development that brings jobs to our youth without order”.

The President also counselled the judges to continually ensure that their decisions and judgements were properly motivated.

He emphasised that the situation where judges preferred judgments based on decisions from lower courts and cited them as law and also gave orders without reason was not acceptable.

“You must be learned, know your case law, and ensure your decisions and judgements are properly motivated”.

President Akufo-Addo also urged the judges to leverage on the e-justice system, instituted by the Government to bridge the technology gap, to expedite and aid the efficient delivery of justice to build confidence in citizens, businesses, and the investor community.

“We know that harnessing the power of technology to advance the rule of law is critical in the modern era if we are to maintain the confidence of the Ghanaian people and shore up our nation’s reputation as a country governed in accordance with the rule of law,” he said.

President Akufo-Addo said though they were taking office during “unexceptional moments in human history”.

The pandemic, notwithstanding, he said, they should not overlook the old age adage that “justice delayed is justice denied”.

“It should be the object of our generation to build a new Ghanaian civilisation where the rule of law is not a slogan but an operating principle for the development of our state, where the separation of powers is real and meaningful, where public officials behave with honesty and trust, where the liberties and rights of our people are fully protected and where law and order provide a firm basis for our social and economic development so that the dreams of freedom and prosperity that animated the great Patriots who founded our nation can find expression in our time,” he added.

Justice Koomson, who spoke on behalf of his colleagues, thanked the President for the confidence reposed in them and assured that they would live up to the responsibility entrusted in them.

“We would like to assure your Presidency and the good people of Ghana that we will continue to protect the rights and liberties of the people with dignity, honesty, and integrity,” he said.