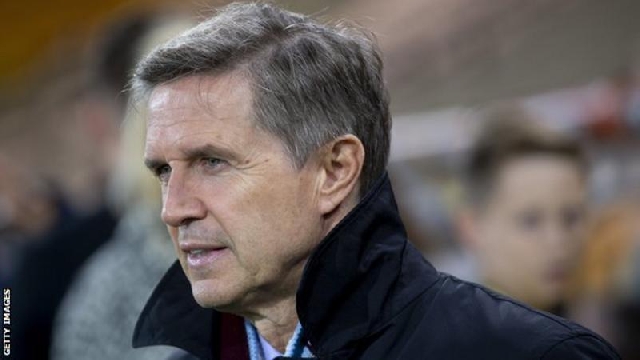 Aston Villa were promoted to the Premier League last season

The plan’s backers want to reduce the Premier League from 20 to 18 clubs and scrap the EFL Cup.

Premier League shareholders will meet on Wednesday to discuss the project and finances in football.

“I don’t think we should give too much credence to this particular plan,” Purslow told Radio 4’s Today programme.

The proposals, led by Liverpool and Manchester United, became public earlier this week and have split opinion.

Under the plan, the EFL would get 25% of all future TV deals, which would be negotiated jointly, plus a £250m bail-out.

However, it would also see more power transferred to the so-called ‘big six’ clubs in the Premier League.

It would need 14 of the 20 current top-flight clubs to vote in favour.

“I think it is highly unlikely that this plan, as it has been described in public, is going to get much traction within the Premier League itself,” Purslow said.

“The idea that somehow the Premier League does not already take a hugely important role in funding the whole of the pyramid is fantasy.

“I think a much broader, long-term plan for football is what I would expect to come from the Premier League.”

EFL chairman Rick Parry said the plan was “in the best interests” of football in this country and praised both clubs for coming up with it.

The Premier League previously said the plan “could have a damaging impact on the whole game” and the Department for Culture, Media and Sport said it was “surprised and disappointed” by “backroom deals being cooked up”.

A joint statement from supporters’ groups of the ‘big six’ teams expressed their concern at the plans.

“While I applaud the notion that the Championship, League One and League Two want to engage with the Premier League, the way to do that is to talk to the chairman and the chief executive of that league, through the front door, not to discuss it with only two Premier League teams.

“I think it’s amazing that the head of the EFL, which is already receiving nearly £400m a year, would have chosen to go live with a plan without discussing it directly with the Premier League.”