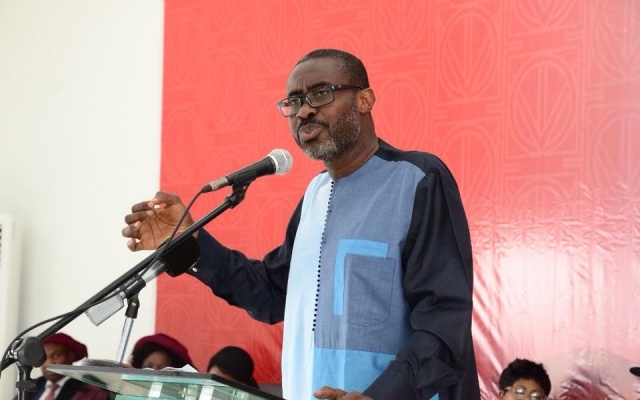 Ace Ankomah is a member of OccupyGhana

Pressure group OccupyGhana has condemned the wielding and firing of a loaded weapon in public by the Minister of Special Development Initiatives, Mrs Hawa Koomson, on Monday, 20 July 2020 at a voter registration centre within the Awutu Senya East {Kasoa) Constituency.

In a statement, OccupyGhana® noted with “grave concern, the news reports that the Special Development Initiatives Minister and Awutu Senya East MP, Mrs. Hawa Koomson, allegedly fired a gun at a registration centre in her constituency. We note that the Minister has admitted to this”.

OG said it has had occasion, especially in the wake of the Ayawaso West Wuogon by-election, to “condemn the use of violence in our electoral politics, whether by government agents or private persons”.

“The use of force or violence is a crime under our laws, unless there is reasonable justification, and within the strict bounds provided by law”, the group said, adding: “Specifically, it is a crime to fire a weapon ‘in a town without lawful and necessary occasion.’ Possession of a firearm ‘without lawful excuse’ is a first-degree felony. And it is also a crime to have an offensive weapon while in a public place, public meeting, or at a public assembly of people, ‘without lawful authority.’”

“We condemn all election-related violence. We also condemn the inexplicable circumstances under which the Minister took a loaded weapon to the registration centre in the first place, when the Minister has police guard, paid for by the state and whose job is to protect her”, OG said.

Further, the group said “the law that regulates the registration of voters also provides a process for challenging ineligible people who register or attempt to do so”.

“That is what should be followed, if people are breaking the law. No individual has the mandate or power to seek to prevent others from registering simply because that individual believes that the law is being flouted”, it noted.

It said in a country governed by the Rule of Law, “you do not prevent an alleged breach of the law, by breaching the law yourself. What the Minister did endangered the lives of not only the political actors, but innocent people whose only interest in being at the registration centre, was ostensibly to exercise their constitutional right to be registered and to vote in the coming elections”.

The pressure group insisted that: “We cannot have a registration exercise and then an election where people would feel so threatened that they would either stay at home and not vote at all, or go to the registration or polling stations armed. Ghanaians are already battling the spread of the dreadful coronavirus. This should not be combined with needless threats to our lives and safety”.

It called on the police to “quickly investigate the circumstances under which this incident occurred”, adding: “If it is found that the Minister breached the law, she should be prosecuted to the fullest extent possible under the law”.

Apart from OccupyGhana, another pressure group, Alliance for Social Equity and Public Accountability (ASEPA), has filed a complaint at the Criminal Investigations Department of the Ghana Police Service against Mrs Hawa Koomson in connection with the same matter.

“We … demand the immediate arrest of Madam Mavis Hawa Koomson and her men and arraignment in accordance with the laws of the Republic of Ghana”, ASEPA demanded in its complaint, adding: “We also demand a compensation or restitution package for all the owners of the motorbikes that were burnt down by the hoodlums and any other property that was destroyed in the process.”

Meanwhile, the Central Regional Police Command has said it is going through the necessary procedures to invite the MP for questioning.

In the interim, Rev. Prof. Emmanuel Asante has said the lawmaker must resign for acting dishonourably at the registration centre.

The minister admitted on Monday to firing the warning shots that marred the voter registration exercise at Kasoa.

There was confusion at the Step To Christ registration centre during the voter registration exercise on Monday, 20 July 2020, when heavily-muscled gun-wielding men stormed the premises to disrupt the exercise.

Officials of the Electoral Commission took to their heels when the men, numbering about 15, ransacked the place.

According to eyewitnesses, this led to a scuffle and pandemonium as the live bullets wrung into the air.

Speaking in his personal capacity rather than for the National Peace Council, which he chairs, Prof Asante described the incident as “very very very worrying”.

“I saw this very late last night before I slept and really, I was disturbed about the whole thing”, he told Benjamin Akakpo in an interview on Class91.3FM’s Executive Breakfast Show on Tuesday, 21 July 2020.

“Why? For the simple reason that we have an honourable minister, an honourable member of parliament also, and I believe that she’s also the NPP’s parliamentary candidate for Awutu Senya East Constituency. We would expect that such honourable people would provide leadership, no matter the provocation”, he explained.

“And, for her to have said that she felt threatened, so, she pulled a gun and fired it and created chaos in that place; what if, in pulling the gun, others, whoever the detractors may be, even if they were around, … also pulled a gun? What would have happened?” he asked.

Prof Asante wondered if “pulling a gun” was the “only option” the minister and MP had under the circumstances.

“Even if her bodyguard was not around, couldn’t she have gone to the police station to inform the police about what was happening? As far as I’m concerned, it cannot be justified in any sense”, he said.

“She should do the honourable thing, and for me, resign”, Prof Asante demanded.

Apart from that, he said the “police must also investigate the matter and let the law take its course for that matter, especially, the context within which this was done – in a situation where tension is rising and we’re doing all we can, people from different angles are doing all they can to ensure that there would be peace and tranquillity in what we are doing; we will not expect our leaders, honourable people to do things of this nature”.

“If I’m an honourable person and I’ve done a thing of this nature, then I need to sit back and consider what I have to do. As for her being a minister, can she still maintain that dignity of an office? This is the thing”.

Beyond asking for her resignation and the police taking her on, Prof Asante said Parliament must also sanction the MP for her “dishonourable” action.

“Parliament must also have a say on such matters. Parliament cannot sit down and think that parliamentarians can do whatever they like and there will be no sanctions whatsoever. I would think that parliament, the executives, the speakers and all the leadership of parliament, will have something to say to this person because she brings the name of parliament into disrepute by her action. I mean, so, in any panicky situation, you pull a gun and shoot it? If an ordinary citizen does that, what is going to happen?”