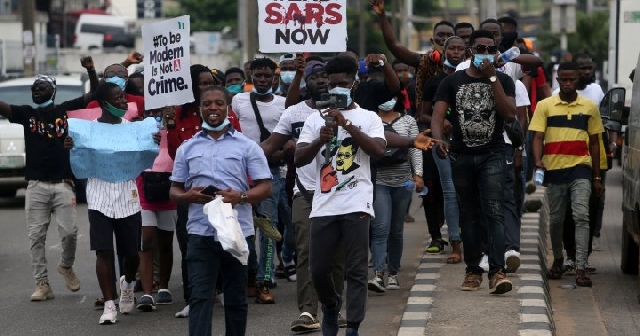 More than a thousand demonstrators have returned to the streets across Nigeria, a day after authorities announced the disbanding of the Special Anti-Robbery Squad (SARS) police unit following nationwide protests against police brutality that were met by a harsh response.

In a statement on Monday, President Muhammadu Buhari promised the government would bring police officers responsible for misconduct to justice.

At least one person has been killed since the demonstrations began. Police have opened fire with guns at marchers, as well as using water cannons and tear gas to disperse them.

Authorities announced on Sunday the dissolution of SARS, long accused of beating up, extorting and killing Nigerians. They added, however, that its members would be redeployed to other police units.

Protesters and rights groups said they were unconvinced by the announcement.

Pointing out that authorities had pledged to dissolve or reform the unit in the past with little change, campaigners among others are demanding the release of all arrested protesters, justice for victims of police brutality and compensation for their families and the swift establishment of an independent body to oversee the investigation and prosecution of all cases of police misconduct.

In his statement, Buhari pledged “extensive police reforms”, acknowledging “genuine concerns and agitations by Nigerians about the excessive use of force and in some cases extra-judicial killings and wrongful conduct of the men of the Nigerian Police Force.”

But he also described police misconduct as relegated to a “few bad eggs”.

After days of angry protests, the president’s office and the police chief announced on Sunday the dissolution of SARS with immediate effect. They also said all SARS officers would be redeployed to other police units.

A demonstrator in Lagos carries a bell during a protest in Lagos. Activists and protesters say the announcement did not go for enough and pledged to keep up their pressure campaign.

Anger over police brutality boiled over last week after a video went viral showing the alleged killing of a man by a police officer in southern Delta state, a video that authorities denied was real.