Rawlings made a name for himself in Ghana, globally – Otumfuo 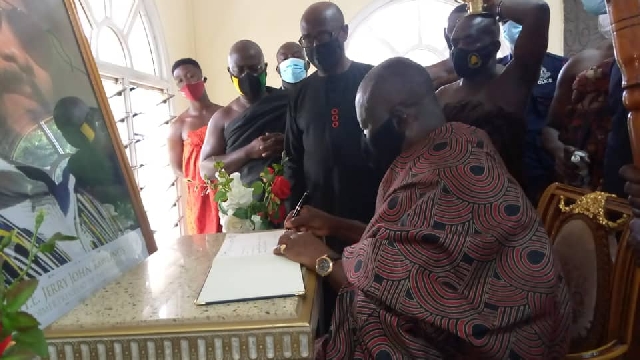 The Asantehene was speaking when the family of the late President visited him at Manhyia to inform him officially about Mr Rawlings’ death on Thursday, 19 November 2020.

Otumfuo Osei Tutu II noted that he and Mr Rawlings had a lot of interactions while he was alive.

“Anytime, there was something and I called him, he would put an end to it. Even when the old lady died, he informed me. I kept telling him that you came to power by coup d’etat but you did everything to ensure that you handed over power peacefully,” the Asantehene said.

He further noted that the former President made a name for himself even beyond the shores of Ghana.

Otumfuo Osei Tutu II stated: “He really made a name for himself in Ghana and across the world. So in love, we pray for a peaceful repose of his soul. Let’s not talk too much behind him, let’s unite to honour him.”

For his part, Mr Victor Gbeho, who spoke on behalf of the family, said: “We’re here to inform His Royal Majesty Otumfuo that on the 12 of this month, November, at about 10 minutes past 10 in the morning, that the friend, colleague and in-law of Otumfuo, President Jerry John Rawlings, departed this life after a short illness”.

“We have been asked to bring this sad news to Otumfuo today; it is the third time that we’re appearing here in six weeks but we ask you to forgive us, and I hope that the effect on all of us will be one that will bring us together”.

The Asantehene took the opportunity to sign the book of condolence opened in honour of the late President during the visit.

“Agyewoden, fare thee well my President and brother,” Asantehene wrote in the book.

It is exactly one week since Mr Rawlings passed away at the Korle Bu Teaching Hospital.