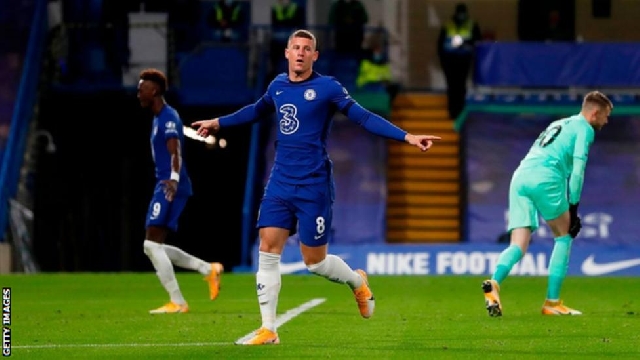 Barkley, who has 33 international caps, has been at Stamford Bridge since moving from Everton in January 2018.

The 26-year-old has played three times for Chelsea this season, scoring once.

“Capturing a player of Ross’s quality is a real coup for our club and I am certain he will thrive here and improve our team,” said Villa manager Dean Smith.

The attacking midfielder has fallen down the pecking order at Chelsea after the signings of forwards Kai Havertz, Timo Werner and winger Hakim Ziyech and is yet to start in the Premier League this season.

He scored in Chelsea’s 6-0 third-round thrashing of Barnsley in the Carabao Cup.

Barkley is the fifth major signing for Villa this summer following the arrivals of winger Bertrand Traore from Lyon, striker Ollie Watkins from Brentford, goalkeeper Emiliano Martinez from Arsenal and right-back Matty Cash from Nottingham Forest.

The 26-year-old has never left any doubts about his talent as a creative force but nor has he ever performed with the prolonged consistency to fulfil the high hopes held for him since he was a teenager.

When he left Everton, his beloved boyhood club, in acrimonious fashion to move to Stamford Bridge, this was meant to be the springboard to the sort of career many expected Barkley to have for club and country.

It simply has not happened.

When he left Everton for Chelsea, it was meant to elevate Barkley to the highest stage.

It simply has not happened.

Barkley now finds himself attempting to rebuild the next crucial phase of his career at Villa Park, a place where you suspect he did not expect to end up at this stage.

Villa have started the season well, have bought ambitiously and have given Barkley a fresh start in a side already containing such fine talents as Jack Grealish.

It is a smart move by the club because they have signed a player on loan who now simply has to produce the goods regularly or risk forever being remembered as an unfulfilled talent.

It is now or never for Barkley.