She’s a “gangster”; prosecute Hawa Koomson if you’re a man of honour – NDC to Akufo-Addo 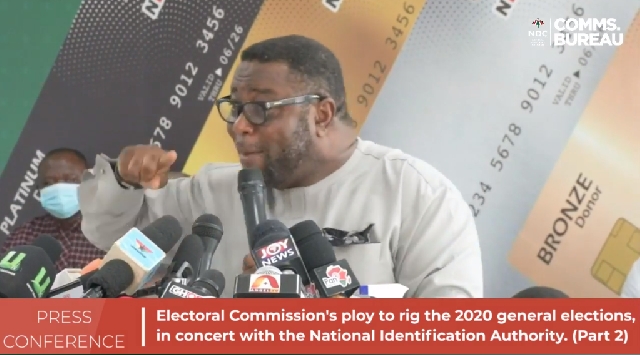 The Minister of Special Development Initiatives, Mrs Mavis Hawa Koomson, has proven that she’s a gangster by firing warning shots a voter registration centre in the Awutu Senya East (Kasoa) Constituency on Monday, 20 July 2020, the Director of Elections of the National Democratic Congress (NDC), Mr Elvis Afriyie Ankrah, has said.

At the party’s weekly press briefing on Wednesday, 22 July 2020, Mr Afriyie Ankrah said: “The NDC is totally disgusted by the thuggish and criminal shooting incident involving a gang of NPP thugs who were led by Hawa Koomson, which has received both national and international condemnation and which has been admitted by the minister of state herself”.

“We condemn, in no uncertain terms, such thuggery sponsored and led by a high-ranking government official and lawmaker, who is supposed to uphold the law by all times”, he told journalists.

According to him, “Hawa Koomson, has, by this singular criminal act and the many others committed before”, through which she and her thugs have meted out violence on “NDC supporters and innocent Ghanaians in the last couple of weeks”, “demonstrated that she’s a gangster, who does not deserve to occupy any public position of trust and we join the many voices of conscience in our society to demand her immediate dismissal from office and her prosecution for these heinous crimes”.

He said: “In any civilised society, this gangster minister would have been arrested and made to stand prosecution by now and this is exactly what her appointor, President Akufo-Addo, should have done by now if he has any integrity, honour and conscience left”.

Meanwhile, Rev. Prof. Emmanuel Asante of the National Peace Council, has said Mrs Koomson must resign for being dishonourable.

The minister admitted on Monday that she fired the warning shots that marred the voter registration exercise at Kasoa.

There was confusion at the Step To Christ registration centre during the voter registration exercise on Monday, 20 July 2020, when heavily-muscled gun-wielding men stormed the premises to disrupt the exercise.

Officials of the Electoral Commission took to their heels when the men, numbering about 15, ransacked the place.

According to eyewitnesses, this led to a scuffle and pandemonium as the live bullets wrung into the air.

Speaking in his personal capacity rather than for the National Peace Council, which he chairs, Prof Asante described the incident as “very very very worrying”.

“I saw this very late last night before I slept and really, I was disturbed about the whole thing”, he told Benjamin Akakpo in an interview on Class91.3FM’s Executive Breakfast Show on Tuesday, 21 July 2020.

“Why? For the simple reason that we have an honourable minister, an honourable member of parliament also, and I believe that she’s also the NPP’s parliamentary candidate for Awutu Senya East Constituency. We would expect that such honourable people would provide leadership, no matter the provocation”, he explained.

“And, for her to have said that she felt threatened, so, she pulled a gun and fired it and created chaos in that place; what if, in pulling the gun, others, whoever the detractors may be, even if they were around, … also pulled a gun? What would have happened?” he asked.

Prof Asante wondered if “pulling a gun” was the “only option” the minister and MP had under the circumstances.

“Even if her bodyguard was not around, couldn’t she have gone to the police station to inform the police about what was happening? As far as I’m concerned, it cannot be justified in any sense”, he said.

“She should do the honourable thing, and for me, resign”, Prof Asante demanded.

Apart from that, he said the “police must also investigate the matter and let the law take its course for that matter, especially, the context within which this was done – in a situation where tension is rising and we’re doing all we can, people from different angles are doing all they can to ensure that there would be peace and tranquility in what we are doing; we will not expect our leaders, honourable people to do things of this nature”.

“If I’m an honourable person and I’ve done a thing of this nature, then I need to sit back and consider what I have to do. As for her being a minister, can she still maintain that dignity of an office? This is the thing”.

Beyond asking for her resignation and the police taking her on, Prof Asante said Parliament must also sanction the MP for her “dishonorable” action.

“Parliament must also have a say on such matters. Parliament cannot sit down and think that parliamentarians can do whatever they like and there will be no sanctions whatsoever. I would think that parliament, the executives, the speakers and all the leadership of parliament, will have something to say to this person because she brings the name of parliament into disrepute by her action. I mean, so, in any panicky situation, you pull a gun and shoot it? If an ordinary citizen does that, what is going to happen?