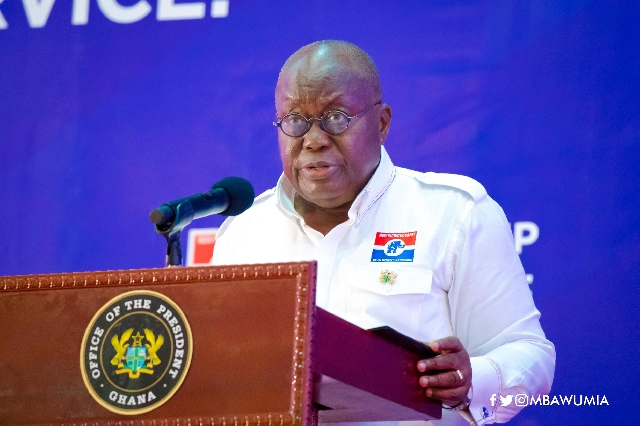 President Nana Akufo-Addo has denied claims that he is leading a tribalistic and divisive government with an agenda against Voltarians.https:

“No one who is committed to the Ghana Project, as I am, can have an ethnic agenda”, he said.

Rather, he noted, “we should shun all those who would promote ethnic sentiments and divisions amongst us for selfish, partisan, political ends”.https:

On Tuesday, 1st September 2020, I paid a day’s working visit to the Volta Region, which took me to Ho, Adaklu and Amedzofe.

Amongst others, I inspected ongoing work on the Ho-Sokode Road Dualisation project, which is nearly 50% complete; and cut the sod for the commencement of construction of the UHAS, Sokode bypass road. At Adaklu, I cut the sod for the construction of Phase III of the Five (5) Districts Water Supply Project, for Central Tongu, North Tongu, Adaklu-Anyigbe, Agotime-Ziope and Ho West Districts.

The day ended at Amedzofe, where I commissioned the $3.78 million five (5) Piped Water Supply System, under the Water Supply Improvement Project (WSIP), which will serve some 69,000 residents in Amedzofe, Ziope, Akpokope/Batume Junction, Matse, Dzolo Gbogame, and surrounding communities.Sod cutting for and Commissioning of Rural Water Systems in Volta61 Photos

The President said: “There are people from this region, some of whom are well-known to you here in Amedzofe, who serve in sensitive parts of my government and influence decisions on a daily basis”.

“I may have my own failings, like we all do, but being a tribalist is not one of them”, the President insisted.

He told a gathering at Amedzofe in the Ho West District where he inaugurated the Five Piped Water Supply System for 69,000 residents of three districts in the Volta Region on Tuesday, 1 September 2020, that if there is one person who recognises and appreciates the indivisibility of Ghana, it is him.

“In my time as President, development has been distributed equitably to all parts of the country, and the impact of our policies has been felt by all.

“So, I want to assure all of you that neither the NPP nor I have any plan whatsoever to bring division to any part of the country,” he said.

Recounting again the circumstances that has led to the deployment of soldiers along the country’s borders, President Akufo-Addo stressed again that the Volta Region was not and has not been singled out for any special military operation.

“The deployment of the military personnel along our borders is an ongoing nationwide exercise, and has been done across all our borders, and not in the Volta Region alone. One thousand (1,000) soldiers are the subject of this deployment, of which one hundred and sixty-three (163) are based along the borders of Volta,” he said.

The President noted that, “their presence is to guard against potential terrorist attacks on our shores, and to prevent the importation of the virus into our country. They have not been stationed at our borders to execute any political or ethnic agenda.”

The President also said he will continue wooing the Volta Region until the stronghold of the biggest opposition party, ditches the National Democratic Congress (NDC) to marry the governing New Patriotic Party and his government.

President Nana Akufo-Addo said he will “keep knocking on the door until the door is opened to me, until the Volta Region and the NPP are married”.

“I know that this constituency, Ho West, will one day revert to being a stronghold for the NPP as it once was for the United Party (UP)”, he said.