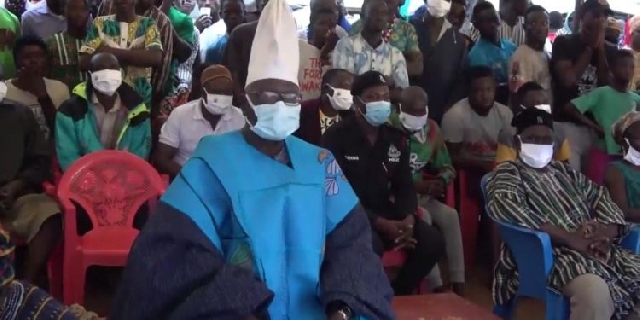 The state of the roads in the Sissala East Municipality will determine how and for whom the people there will vote in the 7 December 2020 polls, the paramount chief of the Tumu Traditional Area, Kuoro Richard Babini Kanton IV, has said.

At a durbar to welcome Vice President Dr Mahamudu Bawumia, who is touring the Upper West Region, Kuoro Richard Babini Kanton IV, said: “One major reason my people and I gave your government a resounding victory in both the presidential and parliamentary elections in 2016 was that we had all hopes in you to fix our major trunk roads; that is the Wa-Tumu-Bolga highway”.

“It is, however, surprising that the road has not been fixed,” the chief told Dr Bawumia.

“Your Excellency”, the chief told the Vice President directly, “this time around, all we want to see is action, and no longer assurances because the road is a major deciding factor in this December polls”.

Meanwhile, the Vice President, who also toured the Upper East Region, has said the Akufo-Addo government’s $1 billion Pwalugu Dam will end all disasters associated with the annual spillage of excess water from the Bagre Dam in Burkina Faso.

So far, 10 people have been killed up north by floods caused by the spillage and torrential rains up north.

Dr Bawumia, who has been touring the area to assess the extent of damage cause to farms, roads, and the locals, said on Thursday, 10 September 2020 that: “At the end of the day, this is a problem that we have kept experiencing year after year and the question I am sure is in the minds of every Ghanaian is what are we doing about it?”

“We have basically understood that to deal with this problem fundamentally, we have to have a flood control in the context of the Pawlugu Dam.

“That is the most important antidote to all of these.

That is why we have moved to secure the Pawlugu Dam project, and this project is the biggest dam project we have in the northern region”, he said.

He said the dam is “the single biggest investment in northern Ghana since independence”.

“It is about $1 billion dollars and the contractors are on site”, he noted.

According to him, the contractors have already commenced work by clearing the site all the way up to the river and noted that the contractors would have to wait for the floods to subside and then divert the water for work to continue.