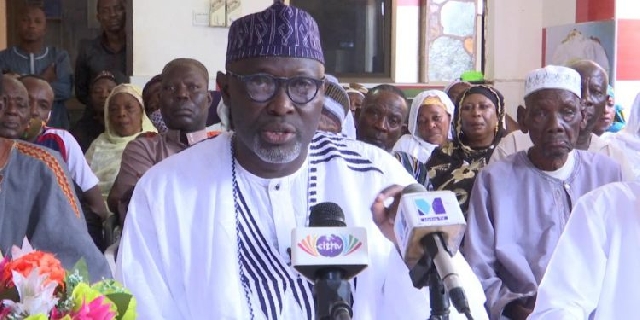 A group calling itself Concerned Muslims of Takoradi has embraced the National Democratic Congress’ special mortuary policy, as captured in the party’s People’s Manifesto.

The group, under the umbrella of Al-Mu’eed Development Foundation, indicated that the intention to facilitate the establishment of morgues, in accordance with Islamic customs, is “an age-old priority of the Muslim Ummah”.

The project and administrative manager of Al-Mu’eed Development Foundation, who is also the Communication Director of the group, Hajj Mohammed Kamil Balla, while interacting with the media on 26 September 2020, said the policy, championed by the NDC and its flagbearer John Mahama, was arrived at through a consultative process.

He added that the attempts to discredit the well-intended policy is needless, unwarranted and over-politicised.

“We note, in particular, the unwarranted propaganda and over-politicisation of a well-intended policy for the Zongo communities and the false, misleading analysis and reportage on the NDC’s proposal to ‘facilitate the establishment of morgues in accordance with Islamic customs and practices and collaborate with the Ministry of Health to set up focal teams responsible for procedures that are compliant with Islamic customs and practices at all state morgues.’

“This, we believe, is a needless attempt to discredit the NDC as a party and their flagbearer H.E John Dramani Mahama.

“The desire to have a separate morgue for Muslims is an age-old priority for the Muslim Ummah in Ghana.”

He explained that establishing separate Muslim morgues is necessary because it will provide a decent and dignifying last respects for the dead in accordance with Islamic teachings and practices.

Hajj Mohammed Kamil Balla, therefore, urged other opposing political parties to present other alternatives while calling on opposing Muslims and organisations to overlook their selfish and political interests on the matter.

“We call on political parties and their cronies, who oppose this all-important and sensitive matter of our faith, beliefs and customs to stop the needless propaganda and provide us with their proposed policy initiatives that are stronger than that of NDC, and capable of eradicating our problems if they have any.

“We also call on our Muslim brothers and sisters who are opposing this policy proposal, to let the consideration of Islamic faith and Muslims be higher and above their selfish and political interest.

“After all, they are supposed to be there for us,” he said.

Meanwhile, Vice-President Dr Mahamudu Bawumia has said unlike the biggest opposition party, the Akufo-Addo government, should it be retained in office after the 7 December 2020 elections, will rather furnished Muslim-dominated communities with model schools.

Speaking at the conference of the National Council of Fulani Chiefs, Dr Bawumia said: “We are going to build a model senior high school in the Zongo community in every region, so, we will start with 16 model SHSs so that our children will have an opportunity to attend those schools”.

“That will be the start for next year.

“We are not thinking of mortuary.

“We are thinking of schools; we want to develop our Zongos with schools and not mortuary”, the Vice-President said.

Just recently, the Chief Imam of the Eastern Region also indicated that mortuaries are not necessities for zongo communities.

Speaking to CTV News, Sheikh Amdani said establishing morgues in Zongo communities is needless because it does not contribute to development.

“We need schools, hospitals, ICT facilities and libraries to bring development and not mortuaries,” he said.

Sheikh Amdani further said that building of mortuaries to store Muslim corpses before burial is not as important as “providing a special place to bathe dead bodies before laying them to rest.”

He reiterated that developing the Zongos through education is better than establishing mortuaries.

However, a non-partisan and apolitical umbrella Muslim organisation known as the Federation of Muslim Councils (FMC), has said it is in support of any moves to establish mortuaries to cater to Muslim corpses in accordance to Islamic traditions must be embraced by all Muslims.

A statement signed by the Secretary-General of the group, Alhajj Muhammad Amir Kpakpo Addo on Friday, 25 September 2020, indicated that the campaign promise made by the NDC “smacks of good thoughts for Muslims” and must be welcomed, adding: “It is, therefore, disingenuous of any Muslim to stand in the way of Islam by impugning on the promise to provide decent and dignifying last respect to the Muslim dead regardless who is making the promise.”