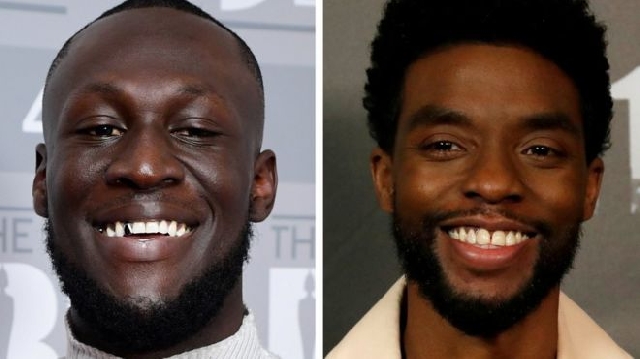 Stormzy said Boseman (right) would be

Stormzy has dedicated the video for his song Superheroes to Black Panther star Chadwick Boseman following the actor’s death from cancer at the age of 43.

The rapper said the late actor would be “forever a superhero in our hearts” in a caption at the end of the promo.

Introducing the video, Stormzy told fans: “You are a superhero in your own right, and don’t ever forget that.”

On the track, taken from his 2019 album Heavy Is the Head, the MC sends a message of encouragement to “young black kings” and “young black queens” – ordinary young people who may be struggling but are heroes in their own lives.

In his introduction, Stormzy said the track was inspired by his realisation that role models had been all around him growing up.

‘The sky is the limit’

“We’re all superheroes. As much as we come from where we come from, we might be disadvantaged, we might have so many obstacles in front of us, you are a superhero in your own right, and don’t ever forget that,” he said.

Directed by Taz Tron Delix, the video was shown at schools in London, Glasgow, Dublin and Manchester on Wednesday.

‘A man who had great hope’

Boseman played Marvel’s first black male superhero, and his death last month prompted a deluge of tributes from his fellow actors plus politicians and many others around the world.

This week, Lupita Nyong’o wrote an emotional tribute to her Black Panther co-star, remembering him as “a man who had great hope”.

The Oscar-winning actress wrote that her “beloved” friend’s death was “a punch to my gut every morning”.

“His power lives on and will reverberate for generations to come,” wrote the star, who played Nakia opposite Boseman’s King T’Challa.