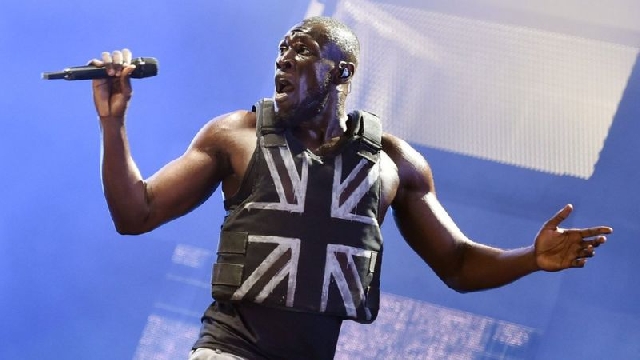 Stormzy’s stab-proof vest, which he wore whilst headlining Glastonbury Festival last year, has been nominated for a major design award.

The Banksy design was donned by the grime star to highlight structural racism.

The winner of the Beazley Designs of the Year prize will be announced by London’s Design Museum next month.

Also in the running is a house created for the Oscar-winning South Korean class war thriller Parasite.

Lee Ha Jun based the entire scheme for the fictional home of the wealthy Parks family on one simple sketch from the film’s director Bong Joon Ho.

The technology used to take years off Robert De Niro, Al Pacino and Joe Pesci in Martin Scorsese’s mobster movie The Irishman is in contention too.

“I thought it was really good,” De Niro told the BBC last year. “I always joke I can gain 30 more years in my career.”

The artist, who last year made the cover of Time Magazine with his satirical take on Brexit, tweeted to say he was “thrilled (and somewhat aghast to be honest)” to be nominated.⁦

In June 2019, Stormzy made history by becoming the first-ever black British solo act to top the bill at the Worthy Farm event.

Wearing the stab-proof Union Jack vest, he used his set to bring attention to inequality in the justice system and the arts.

The eye-catching vest was created by the famously anonymous artist Banksy from a former police issue garment.

The organisers of the new exhibition said it was “a defining cultural moment”.

Several months after his big gig, Stormzy told Q Magazine that technical issues had made it the “most difficult thing” he had done.

“Then after calming down for an hour,” he added, “Some of the people at the festival – Emily Eavis and that – gave us a memory stick to watch it back. And I got about halfway through and I was, like, ‘I think it all went alright’.”

Also in contention are the sound design for the award-winning TV drama Chernobyl, and a virtual library aimed at evading censorship in the computer game Minecraft.

A Chinese hospital built in 12 days at the epicentre of the coronavirus pandemic is recognised on the longlist; as well as the vegan Impossible Burger 2.0; and The Renegade – a dance choreographed by the then 14-year-old Jalaiah Harmon, which went viral on the social media platform TikTok.

The exhibition opens at the Design Museum in London on Wednesday 21 October and runs until 28 March 2021, with an overall winner being announced on 26 November (there are also winners for each of the categories).

Last year the overall prize was won by Anatomy of an AI System by Kate Crawford and Vladan Joler.