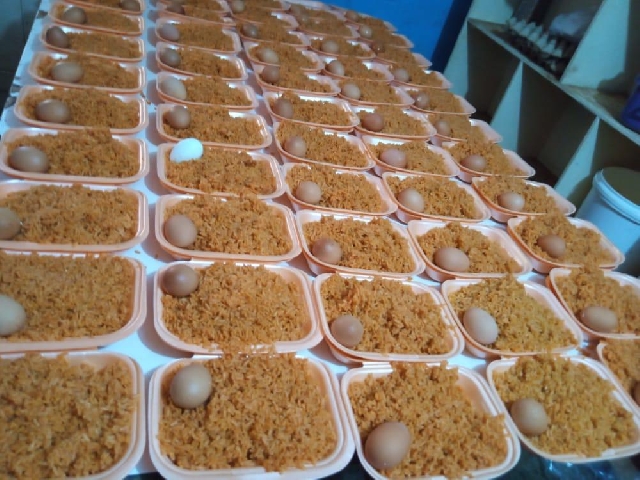 Headteacher of the Prisons Junior High School (JHS) in Accra Alfred Odame has said final year Junior High School students across the country must take advantage of the free meal being served them and their teachers to study harder and come out with flying colours in the upcoming Basic Education Certificate Examinations (BECE).

The government commenced the serving of one free meal a day to final year JHS students and teachers on Monday, 24 August 2020.

This is in fulfilment of President Nana Addo Dankwa Akufo-Addo’s promise to provide one free meal a day to final year JHS students as part of measures to protect students and teachers from contracting the deadly COVID-19 while preparing towards the BECE.

Confirming receipt of government’s free meal, headmaster of the school, noted that the food’s packaging was nicely done.

Mr Odame stated: “Yes we have received for both the children and the teachers and the way it has been served is nice. Even they promised that today is just the beginning, tomorrow onwards, it’s going to be nicer as we see it today. So we’re hoping that it will continue like that. It’s jollof rice with fish so we pray that it will continue like that.”

Mr Odame also expressed hope that students will take advantage of the meals to make an impact in the impending exam.

“We’re praying they’ll also take things serious and then take advantage of this and learn and then come out with good results. So far, we don’t have any problems,” the Headmaster said.

All candidates sitting the BECE this year will enjoy one free hot meal a day, President Akufo-Addo announced in his 15th COVID-19 address to the nation on Sunday, 16 August 2020.

The President said: “Our phased approach toward returning our lives to normal, through the strategic, controlled, progressive, and safe easing of restrictions, will, thus, continue”.

“Most final-year university students have already completed their examinations, and, by 18th September, SHS 3 and JHS 3 students would have finished their respective final examinations of WASSCE and BECE.

“As a result of reports I have recently received that some final-year JHS students were going hungry, in complying with COVID-19 protocols, I have just instructed the Minister of Gender, Child and Social Protection to begin preparations to ensure that from 24th August up to 18th September, all five hundred and eighty-four thousand (584,000) final-year JHS students, and one hundred and forty-six thousand (146,000) staff, both in public and private schools, be given one hot meal a day”, the President said.

“This is to ensure full observance of the COVID-19 safety protocols”, he explained.

Deputy Minister for Gender and Social Protection, Freda Prempeh who was also on a tour of the schools to confirm the distribution of the free meal described the takeoff as good.

The Deputy Gender Minister said: “I must say so far so good, the caterers have done well, they’ve been able to bring the food on time. We actually gave them 10.30 am. When I got to Independence Avenue, it was a little before 10.30. It was when I was leaving the place that I saw that the caterer had just driven in, she had come to serve the food.

“I believe the quality of food is also good and they’ve been packaged well. We asked them to give them an egg and also a sachet of water and you can see for yourself that they’ve brought the water and the food packed in a nice paper bag and all that.”

She also noted that the food will have a positive impact on the students psychologically.

“So so far so good, I think that the children are happy and psychologically, it’s going to affect their work output as well. So we hope that we’ll be able to sustain the momentum from now till the end of the period which is the 18 of September,” the Deputy Gender Minister added.