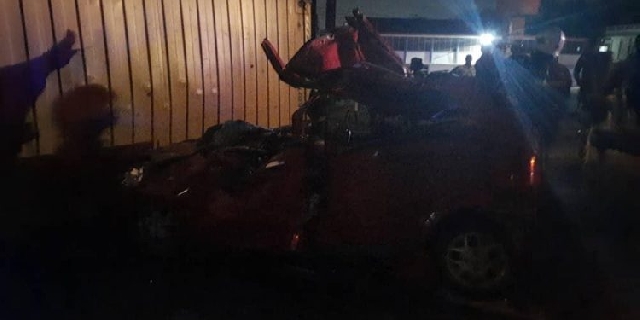 A driver, Eric Pamford Peters, 30 and a passenger, Ama Amponsah, 27 have been crushed to death on the Vodafone [Kansuarina] highway in Takoradi after a cocoa container truck fell on a Daewoo Matiz car they were driving in.

The truck was carrying cocoa and was heading towards the Takoradi Habour for export but the container fell off and crushed the two occupants in the Daewoo Matiz on the highway.

The deceased were trapped in the dismantled car but the men from the Fire Service and Road safety recovery truck helped removed them.

The truck driver, Emmanuel Kwaku has been arrested and in police custody.

The bodies have since been deposited at Effia Nkwanta Government hospital morgue.