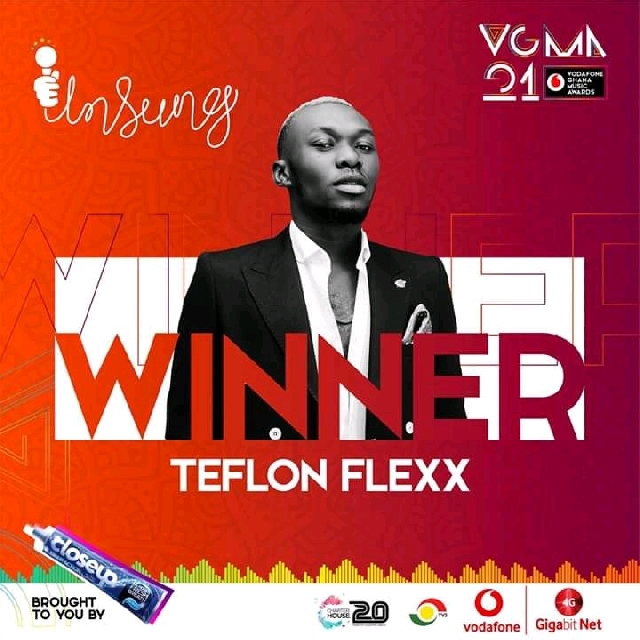 Teflon Flexx is 2020 Unsung Artiste of the year

Ahead of the 21st Annual Vodafone Ghana Music Awards scheduled to take place from 28 to 30 August 2020, the event organiser, Charterhouse, has announced Teflon Flexx as the winner of the 7th edition of the VGMAs Unsung Category.

The ‘Stew Gang’ boss expressed gratitude via social media for the recognition, saying, “Chale I no fit express my gratitude finish, my heart is full joy right now and I’m so grateful for all the support you guys gave me … God richly bless everyone. #StewGang @vgma21”

His song ‘Madina’, which featured Dj Wobete, won both the ‘Interlude Song of the quarter’   and ‘The Afrobeats song of the Quarter.’

A statement issued by Charterhouse explained that “these talented artistes were featured in an up-close live-band music session” and performed two of their best songs.

It was hosted live in the Music Room.

The programme was broadcast on TV3, GhOne TV, TV7, EBN TV, Homebase TV, CTV, and online on Facebook and YouTube.

The general public were asked to vote and give the chance to one of them to perform at the 21st Vodafone Ghana Music Awards.

Teflon Flexx emerged the winner, after garnering the largest number of votes.

Teflon Fexx, from the Upper East region, becomes the 7th winner of the Unsung Category of the Vodafone Ghana Music Awards, since the category was introduced.

On 28 August 2020 (Day One of the VGMA weekend), Teflon Flexx will perform to millions of people live on local TV station (TV3), continental TV Stations (Sound City, the Base TV on DStv), and worldwide via social media on MTV Base and Ghana Music Award pages.

Charterhouse congratulated Teflon Flexx for the great feat, and encouraged him to use the VGMA platform to advance his career.

Charterhouse also congratulated the other contenders in the same category

“We would also like to congratulate Imrana, Gyakie, Kofi Jamar, Sherry Boss and Abochi for running the race. From experience, we know that not winning a contest does not define how far you go in your career. So, keep grinding the wheels of success to the best of your ability,” the statement noted.