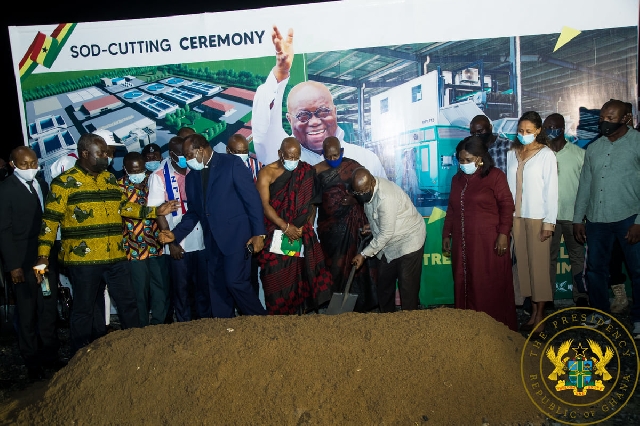 Akufo-Addo with the shovel

The President of the Republic, Nana Addo Dankwa Akufo-Addo, has cut the sod for the commencement of the construction of a sewer network and wastewater treatment plant, and a solid waste treatment facility, at Tema.

According to President Akufo-Addo, Tema is the foremost, well-planned community in Ghana, with a central sewerage network, pumping stations, and a treatment facility, which were constructed and commissioned in 1963, and, consequently, rehabilitated in 1994.

The facility, the President noted, has been shut down because almost all the sewer lines have become obsolete and overaged, thereby creating environmental pollution and occasioning serious health hazards for residents.

“The sewer system can, therefore, not cope with the volumes generated as a result of increased population,” he said.

The President continued, “It is, thus, for this reason that Government deemed it prudent to facilitate the construction of an Integrated Recycling and Compost Plant and a Waste Water Treatment Plant to address the environmental sanitation challenges confronting the good people of Tema.”

He explained that the facility will be a modern wastewater treatment plant with a combined system that will treat both wastewaters from the network and septage from cesspool trucks.

“The design capacity is 44,000 cubic metres per day for wastewater from the sewer network, and 1,000 cubic metres per day of septage from cesspool trucks, for areas that are not on the network. The entire wastewater treatment plant will comprise the construction of a new treatment plant, rehabilitation/retrofitting of the pumping stations, and construction of a new reticulation system (sewer network)”, President Akufo-Addo added.

Additionally, a four hundred (400) metric ton state-of-the-art Integrated Recycling and Compost Plant will also be constructed at Ashaiman, and it is expected to receive, sort and process some four hundred (400) tons of municipal solid waste per day, to provide a sustainable solution to the solid waste disposal problem in Ashaiman and its environs.

Once completed, the plants will provide an opportunity to have effective and efficient management of municipal solid and liquid waste in a more environmentally-friendly and sustainable manner.

The production of organic compost for horticultural and agronomical purposes will be an added advantage to boost agricultural production and the programme for Planting for Foods and Jobs.

“Processing of the recyclable fractions of the waste, i.e. paper, plastic and metal, for reuse as input materials for recycling will, in the medium to long term, improve sanitation in the area. Furthermore, the Integrated Composting and Recycling Plant and the Waste Water Plant will create hundreds of direct and indirect employment opportunities,” he said.

President Akufo-Addo told the gathering that government has awarded a contract for the decommissioning and re-engineering of the Kpone (Tema) and Oti (Kumasi) landfill sites, to receive the growing solid waste generated within the Greater Accra Metropolitan and Greater Kumasi Metropolitan Areas respectively, so as to restore the sanctity of the environment.

He, thus, urged all key stakeholders, particularly the Metropolitan, Municipal and District Assemblies (MMDAs), to collaborate with the operators of the facility.