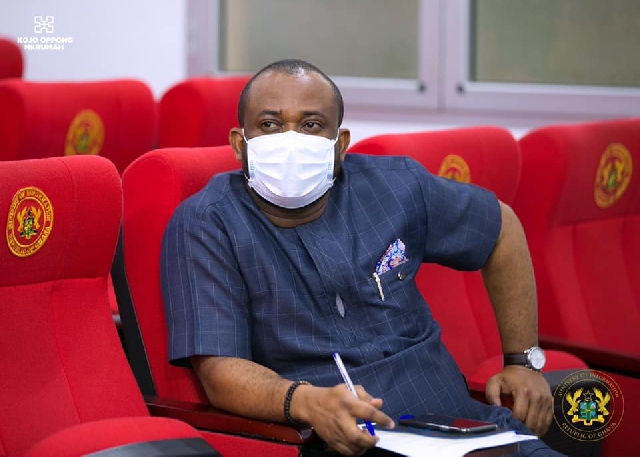 Deputy Information Minister Pius Enam Hadzide has said President Nana Akufo-Addo’s first-term achievements are unparalleled in the history of the Fourth Republican Constitution and believes that if the president is given another four-year term by Ghanaians at the December polls, his two-term achievements will outshine that of “even the hardworking government of the venerable John Agyekum Kufuor” due to the former President’s tutelage and mentorship.

According to him, no president’s first-term achievements, since 1992, comes anywhere near that of Nana Akufo-Addo’s.

Denying claims that his analysis was a subtle attack on Mr Kufuor, the Deputy Information Minister told Kwabena Bobie Ansah on The Citizen Show on Accra100.5FM on Thursday, 13 August 2020 that he conceded in his analysis that “the standard we are using is the hardworking government of John Agyekum Kufuor but all fathers want their children to be better than them”.

“The statements I made are statements of fact”, he said in reference to President Akufo-Addo’s free senior high school programme, tax cuts to businesses, among a raft of other achievements.

According to him, his analysis was not targeted at former President Kufuor but encompassed all eras of Nana Akufo-Addo’s predecessors.

“If Akufo-Addo is given another term so that he does eight years, I believe that due to the good tutelage he got from former President Kufuor, his achievements will even surpass those of his mentor”, Mr Hadzide told Bobie Ansah, stressing that it was not a denigration of the former President’s achievements as being skewed by his detractors.

Subsequent to that interview, Mr Hadzide has denied a newspaper publication which alleged that he had been tasked by President Nana Akufo-Addo to sully the name of former President John Kufuor.

“My attention has been drawn to a frivolous publication in the Daily Post newspaper issue of today, 13 August 2020 with the caption ‘Akufo-Addo unleashes Pius Hadzide on J.A Kufuor to denigrate the ex-President’s legacy’.

“I wish to state for the record that the said publication is false”, Mr Hadzide said in a stamen.

According to him, “at no point has there been any attempt to bring to disrepute the legacy of former President J.A. Kufuor nor has the President directed me on any such agenda”.

Indeed, he added, “it is the desire of the current administration to improve upon and safeguard the legacy of the high performing J.A. Kufuor administration in which Nana Akufo-Addo served with distinction”.

“It cannot and will never be that I or anyone within the Dankwa-Busia-Dombo tradition will seek to belittle the legacy of the former President”, he noted.

The publication, Mr Hadzide said, “is clearly motivated by hatred and ill-will and I call on the public to disregard it”.

“It is only a deranged person who will seek to belittle the contribution of former President J.A. Kufuor to the development of this country”, Mr Hadzide said.

He said: “Indeed, the New Patriotic Party(NPP) has proven through Ex-president Kufuor and President Akufo-Addo that it is the only party truly committed to and capable of delivering development to Ghana through the many policies it has implemented”.

“I advise the writer, the newspaper, their paymasters and sponsors from within the National Democratic Congress to rather apply themselves and expend their resources on discussing and resolving the obvious cracks, bickering and divisions within their ranks as evidenced by the publication of a book by one of the advisors-in-chief to their flag bearer John Mahama denigrating their founder.

“Again, I call on the good people of Ghana to treat the said publication and its content with the greatest contempt it deserves. It is everything journalism is not”.