‘The top caved in first; I couldn’t see a thing; God saved me’ – Church disaster survivor 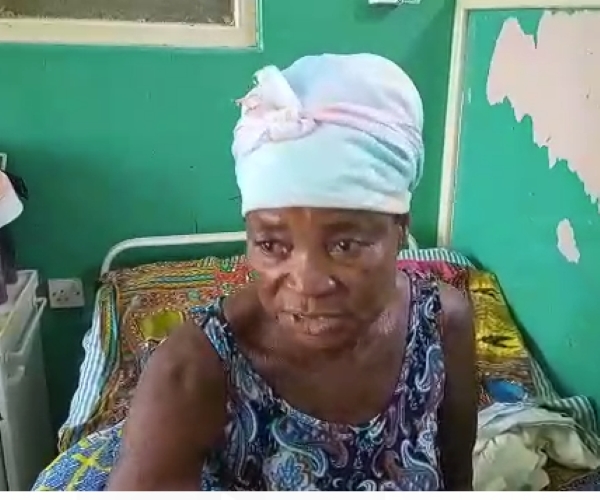 A 58-year-old woman who survived the Akyem Batabi church collapse in the Asene Manso Akroso District of the Eastern Region, has said she has been fellowshipping with the church for 33years.

The woman, who was among the survivors of the disaster, disclosed this while on admission at the hospital.

Narrating the events that led to the collapse of the building to Kenneth Oduro of Akyemmansa FM on Thursday, 22 October 2020, the woman said they were asked to sleep at the church premises while they embarked on a fast to enable them to see visions in their dreams.

“They asked everyone to come and sleep so that we’ll get a vision, so, I was going to take my dress, which I was drying outside. While I was going for it, I realised someone had taken it. So, I was even getting angry. When we were coming back, someone told me that they lost their dress and that a certain woman had taken it.

“So, another man told me to forget about it and go to bed. I resolved to throw the dress away if I saw it again. If I had gone, I would not have been inside when the building collapsed.

“All I heard was the top caved in and the other side also caved in.

“We were rescued at 2 [O’clock]. I couldn’t see anything, the world looked dark, the place was dark. The steps had covered me, every place was blocked; there was no way we could have come out, it’s by God’s grace that we survived,” the woman said.

Asked why she attended the church on that fateful day, she said: “You know in life, there are lots of enemies, so, when you find a man of God, you have to surrender and be submissive to the church. The church is good. I would be telling lies if I denied that fact. I’ve been fellowshipping with him for 33 years.”

A total of 16 people have, so far, been confirmed dead from the disaster.

Rescue efforts are still continuing with the help of excavators and sniffer dogs.

Meanwhile, the District Chief Executive of Asene Manso Akroso, Mr Alex Inkoom, has said his District Engineer revealed to him only on Tuesday, 20 October 2020, just hours after the collapse of the three-storey church that he (the Engineer) had warned the congregants of the looming danger two weeks earlier after passing through the area.

The congregants of the Church of Prosperity, numbering more than 60, had converged on the church premises to pray and fast for their founder, who had taken ill, when the incident happened.