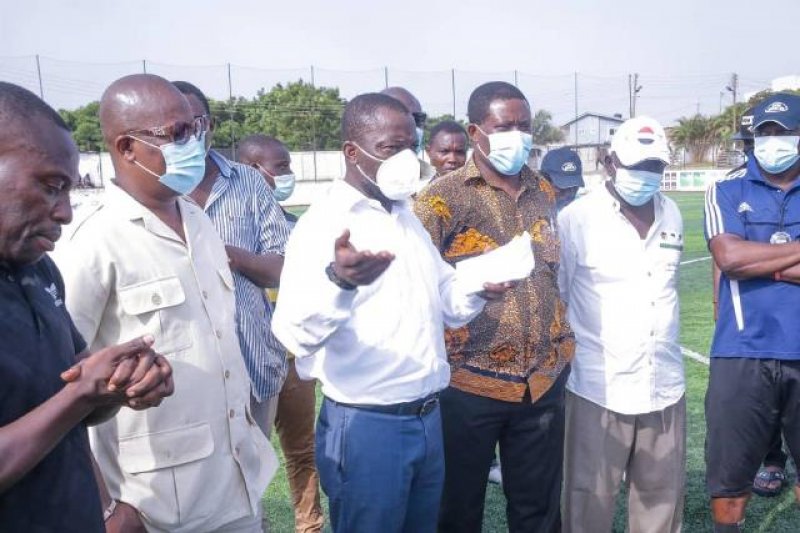 The three, who are avid supporters of the club; Mr. Mohammed Sowah, the Chief Executive Officer (CEO) of Accra Metropolitan Assembly (AMA), Mr. Boye Laryea of Okaikwei North Municipal Assembly and Dr. Emmanuel Lamptey, of the Ga Central, also donated footballs and jerseys for ball boys to the club for their impressive performance in the league so far.

Presenting the items, the AMA boss, Mr. Adjei Sowah tasked the management and playing body to go all out to win the 2020/21 Ghana Premier League (GPL) title.

He said “Great Olympics won the Ghana League in 1970 and 1974; making it three this season would be the icing on an eventful season that has seen you brush aside the two glamorous clubs in the country – Hearts and Asante Kotoko”.

Mr. Adjei Sowah challenged the playing body to remain confident and focused on winning the coveted GPL trophy to make their fans happy.

“Playing in Africa is our desire and we want to see Great Olympics at the continental level and as a group, we must work to ensure that you achieve just that.”

He stressed that, the win over regional rivals, Hearts of Oak brought joy to the club’s supporters, adding that a sustained performance would earn the team more support from the fans.

The AMA boss pledged to mobilise all true faithfuls of the “Dade” family to contribute towards the progression of the club.

“We would make sure Great Olympic supporters everywhere come together to support the management, technical team, and playing body to achieve successes,” he added.

Mr. Adjei Sowah called on the management to distribute the jerseys to the club’s ball boys, saying that, “ball boys all over the world become footballers and in a case where it happens here, they would first consider our club”.

Olympics are currently joined at the top with 21 points with Karela United after 12 matches.