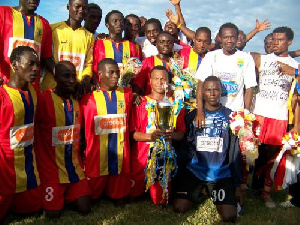 On this day 19 July 2009 (Exactly 11 years ago today) Accra Hearts of Oak secured their 19th and last Ghana Premier League title after they chalked a 2-0 win over relegation bound Sporting Mirren at the Ohene Djan Stadium.

It was must win game for the Phobians and they lived up to that expectation with an early goal from the foot of Samuel Affum who pounced on a Francis Bossman’s set up to fire past goalkeeper Muntari Tagoe in under one minute of the commencement of the game.

Hearts thus won the League title with a total point build up of 52, leaving close contenders Kumasi Asante Kotoko with 49 points as they were held two all by city rivals King Faisal at the Baba Yara stadium to draw the curtain down on the League.

Even though the goal brought the entire stadium to a standstill with a large army of the Phobians filling the stands to witness the crowning moment, it partly took the shine out of Hearts as the relegation bound team assumed some dominance of the game.

Hearts exhibited a lot of faulty passes in the first quarter of the game, with Mirren who seemed to be well composed with swift inter-positional play, were however unable to make any accurate and meaningful penetration into the defence of the champions. The remaining 30 minutes of the half saw action from one side of the pitch to the other with the play makers of the two sides being the main characters

Hearts’ Tawrick Jibrile took on the defence of Mirren and had only keeper Tagoe to beat but a feeble shot was the end result in the 26th minute with Mirren’s captain Frank Boateng also embarking on a similar adventure but had goalkeeper Philemon McCarthy to contend with in the 33rd minute.

The Phobians once again benefited from the exchanges when in a similar fashion, Affum whose role as the Club’s striker had been widely criticized by the followers latched on a perfect pass from Jibrile to run through the defence of Mirren to score the second goal in the 36th minute to send the enthusiastic crowd into wild jubilation. With a comfortable 2-0 lead the Phobians from then were sure of the trophy with the Club faithful chanting praises in the remaining minutes of the half.

The second half saw a fairly balanced game, but it was Mirren who should have benefited in the 55th minute, when skipper Boateng took the Hearts defence on but he was unable to make good use of the opportunity, whilst a similar opportunity that fell the path of George Ankama was also blown off in the 68th minute to the relief of the Phobians.

With Hearts seeking for another goal, Mirren also were desperately searching for the equalizer in an effort to reduce the score-line and when Ankamah was again given an opportunity he messed it up in the 75th minute.

Six minutes on, Boateng was on hand to reduce the tally, but saw his shot pushed to corner by keeper McCarthy, with the resultant kick wasted.

Hearts in the dying minutes of the game made series of unsuccessful efforts to score and had to make do with the two goal margin which was enough to see them win the premiership at the end of the 90 minutes and sent most of the supporters clad in white and colours of the Clubs waving their white handkerchiefs amid singing and dancing to various music.

On this day 19 July 1959 (Exactly 61 years ago today) Kumasi Cornerstones moved to the top of the National League table with a dramatic 6-5 victory over the fabulous Asante Kotoko at the Kumasi Jackson Park.

Cornerstones’ remoulded attack began well enough and within ten minutes they were two goals ahead having scored through inside left Prah and outside left Donkor.

In the 15th minute play turned in favour of Kotoko, Mohammed Salisu hit the net in the 16th minute, to put the score at Cornerstones 2 -1 Kotoko.

Kwame Adarkwa equalised for Kotoko in the 28th minute with a header from an Asebi pass.

Exchange became even after this goal with both teams attacking in turns. Twice centre forward Rockson of Cornerstones got within scoring range but shot wide.

Joe Aikins put Corners in the lead with a powerful ground shot following a corner kick taken by Rockson.

Dogo Moro at Kotoko back missed his tackle in the 35th minute and with a knee high shot Aikins beat goalkeeper Duncan to put Corners up 3-2.

Aikins again made it 4 for Cornerstones with a free kick just before the interval.

Kotoko, taking advantage of Appiah’s absence in the early minutes of the second half attacked incessantly and succeeded in beating the score 4-3 in a goal – mouth scramble.

Kotoko pulled even in the 60th minute on another melee following a free kick taken by Opoku Mensah.

Cornerstones shot ahead again in the 75th minute. A shot from inside right Prah hit goalkeeper Sebastian Duncan and bounced into play and with a timely lob, centre forward Rockson scored.

A penalty- kick awarded against Kotoko and taken by left back Ben Simmons put Cornerstones ahead 6-4 in the 86th minute.

But a minute later, Kotoko were also awarded a penalty – kick and Baba Yara beat the score down to 6-5.

It was all Cornerstones on the closing minutes but the Kotoko defenders held on gallantly until the final whistle.

The Gold Coast along with British Togoland, now known as Ghana, competed at the 1952 Summer Olympics. Seven competitors, all men, took part in five events in one sport. It was the first appearance of the West African nation, which didn’t win a medal at its debut.

The nation has sent athletes to compete in most Summer Olympic Games since then, missing the 1956 Games, boycotting the 1976 Games in protest of the participation of New Zealand (who still had sporting links with apartheid South Africa), and joining the American-led boycott of the 1980 Summer Olympics.

Ghanaian athletes have won a total of four Olympics medals, three (two bronze and one silver) in boxing, and a bronze medal by the under-23 Ghana national football team in 1992.