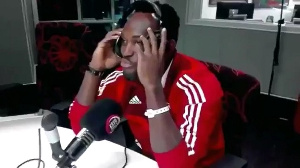 This was revealed when the former Chelsea international made a studio appearance recently and was made to listen to a radio commentary of how the Black Stars missed an opportunity to become the first African team to reach the semi-finals at the World Cup.

Thursday, July 2 marked ten years since the unfortunate incident where the Black Stars were on the verge of becoming the first African team to reach the semifinals stage at World Cup when Luis Suarez handled Dominic Adiyah’s goal-bound header which had crossed the line to deny the Black Stars of their dream qualification in the dying minutes of extra time.

The Uruguayan international was sent off and Ghana was awarded a penalty to redeem glory. Having scored two penalties at the tournament, Gyan stepped up to kick the penalty but infamously missed and that missed penalty has since become the agony of many Ghanaian football fanatics.

The Black Stars eventually lost the penalty kicks after extra-time and were knocked out of the tournament.

Ten years after the incident, it appears Micheal Essien who did not feature at the tournament has not been able to get over that nightmare in Johannesburg.

In a video which surfaced online, the former AC Milan player stopped listening to the commentary, pulling the headphones from his ear after Gyan’s shot hit the woodwork.

Many Black Stars players who still harbour the pain of that infamous night in recent times have disclosed how they’ve not been able to forgive the villain Luis Suarez till date.