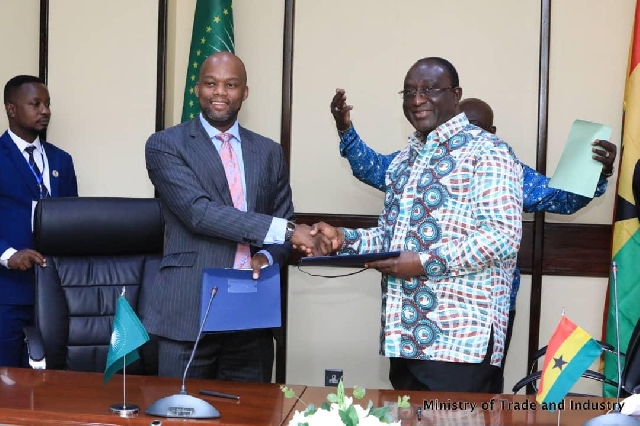 Ghana’s Ministry of Trade and Industry, on behalf of the people of Ghana, has signed the framework for the grant disbursement between the African Continental Free Trade Area (AfCFTA) Secretariat and the West African country.

The grant is in fulfilment of Ghana’s pledge to play host to the African Union/AfCFTA Secretariat, which will be in full operation from 1 January 2021.

The agreement was signed on Tuesday, 20 October 2020, on the sidelines of the 2nd National Conference on the African Continental Free Trade Area in Accra.

The conference, which was held on the theme: ‘Empowering Ghanaian businesses to harness the benefits of the African Continental Free Trade Agreement under the framework of the National Export Development Strategy (NEDS)’, was organised by the Ministry of Trade and Industry (MoTI), the Ghana Export Promotion Authority (GEPA) and the National AfCFTA Coordination Office, in collaboration with the United Nations Economic Commission (UNECA).

The opening ceremony of the two-day conference was attended by the business community and other stakeholders including the President of Ghana, Nana Addo Dankwa Akufo-Addo and other high-profile personalities of government and the diplomatic corps.

In his speech, the president reiterated the government’s commitment to assisting Ghanaian enterprises to take advantage of the coming into force of AfCFTA.

The President explained that AfCFTA will ensure that trading among member states on the continent will be duty-free and quota-free.

Nana Akufo-Addo indicated that Ghana has put in place the ‘One District, One Factory’ initiative; developed new and strategic anchor industries ranging from garments and textiles; pharmaceuticals, automobile assembling to component manufacturing coupled with other interventions such as the Planting for Food and Jobs programme; the Planting for Exports and Rural Development (PERD) initiative; the establishment of 67 Business Resource Centres and 31 Technology Solution Centres; and the development of Industrial Parks and Special Economic Zones, all of which are to help the nation harness to the fullest, the benefits of AfCFTA.

The Minister of Trade and Industry, Mr Alan Kyerematen, who has played a key role from the inception of this African Free Trade Agreement, extended his appreciation to the efforts of the partners of his ministry, namely Ghana Export Promotion Authority (GEPA), the Ministry of Foreign Affairs and Regional Integration, United Nations Economic Commission for Africa (UNECA), the National AfCFTA Coordination Office and corporate sponsors Absa Bank and Stanbic Bank for helping to put together the conference.

The minister, in his speech, reminded the participants that this is the 2nd National Conference on the AfCFTA Agreement.

The first National Conference was organised from the 19th to 21st August 2019, which was aimed at explaining to the general public, in particular private sector operators, the government’s vision for the AfCFTA Agreement and how AfCFTA can boost the country’s resolve to achieving a ‘Ghana Beyond Aid’.

He also indicated that the AfCFTA Agreement, when fully implemented, has the potential to boost intra-African trade by as much as 52.3% by 2022 and this could double as non-tariff barriers are eliminated.

Mr Kyerematen commended President Akufo-Addo for his tenacity and unwavering commitment to the operationalisation of the AfCFTA Secretariat in Ghana.

He emphasised that private sector operators in Ghana should leverage this commitment by the government of Ghana and position themselves to take full advantage of the AfCFTA Agreement.