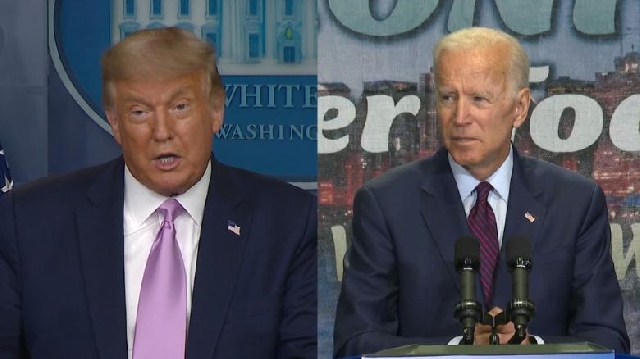 Bob, a manager at a personal care product manufacturing plant in northeast Pennsylvania, is one of the voters who may decide the outcome of the United States presidential election in November.

A 50-something-year-old resident of a crucial battleground state, Bob, who asked Al Jazeera to withhold his surname to protect his privacy, is not affiliated with either the Republican or Democratic party.

Since 2000, he has voted for candidates from both sides of the political spectrum. In 2008, Barack Obama won Bob over. In 2016, it was Donald Trump. In both cases, his decision pivoted on the candidate he felt would do the most to protect US manufacturing jobs like his.

“I had hoped that with the Obama administration, we would see positive change,” Bob told Al Jazeera. “But for me and most people I know, it was a disastrous period. In addition to my very good healthcare plan being gutted and now more expensive, I lived through thousands of jobs in the company I work for either becoming eliminated, consolidated or moved out of the US.”

Bob kept his job, he said, but many of his colleagues did not.

“The last four years of the Obama administration were particularly devastating to manufacturing. The trade deals and regulations only added cost, and the main offset to the additional cost meant fewer people,” he explained.‘Blue-collar boom’

Manufacturers in the US employ nearly 13 million workers, but from 2000-2010, those jobs were slashed by a third as China surpassed the US as the world’s leading manufacturer, according to Indiana University’s Manufacturing Policy Initiative.

Trump was partly elected on his promises to bring manufacturing jobs back to the US. But what was a relatively healthy US manufacturing landscape during Trump’s first year in office started to turn sour in 2018 – the year his administration began unleashing a string of punitive tariffs against major trading partners, most notably China.

Though manufacturing output and employment started to fall in 2018, Bob said he has witnessed growth in his industry that he credits to tax cuts and regulatory rollbacks initiated by Trump.

“We’ve had to increase our wages to attract good people,” he said of the plant where he works.

Bob plans to cast his vote for Trump again this November because “he has added jobs, and we still need more”.

His observations speak to the “blue-collar boom” Trump espoused during his 2020 State of the Union address when he highlighted the roughly 500,000 US manufacturing jobs created after he took office and before the coronavirus pandemic sent the economy off the rails.

But some dispute whether Trump is deserving of a victory lap for that pre-COVID strength in US factory employment.

Researchers from the Economic Policy Institute, a progressive-leaning think-tank based in Washington, DC, point out that the 500,000-manufacturing job “boom” heralded by Trump is actually on par with the numbers seen throughout the country’s continuing economic recovery since the 2008 crash, which amounts to about 166,000 manufacturing jobs gained every year between 2010 and 2019.

But Trump’s claims, and what his rival, Democratic presidential candidate Joe Biden, plan to do to protect jobs like Bob’s, remain a major issue this election cycle.The high price of ‘Made in America’

Trump made “Made in America” one of his catchphrases on the 2016 campaign trail, and it has figured prominently in many of his administration’s “America First” initiatives, including an August executive order mandating essential medicines and medical countermeasures be produced domestically.

Biden has touted his own “Made in All of America” plan on the 2020 campaign trail, promising $400bn in federal procurement investments for products, materials and services made in the US. Biden claims his plan would be the largest “mobilization of public investments in procurement, infrastructure and R&D since WWII”.

But while onshoring seems like a noncontroversial platform – both candidates broadly agree on plans that prioritise US-made goods  – the programmes may come at a hidden cost to taxpayers, some economists say.

Gary Hufbauer is a nonresident senior fellow at the Peterson Institute for International Economics, an independent think-tank in Washington, DC.  Hufbauer’s research modelling suggests that sticking to an exclusively “Buy American/Made in America” government procurement plan could cost taxpayers up to $250,000 per job “saved”.

The results, Hufbauer said, are increased costs that are likely to benefit manufacturing firms without trickling down to workers.Looking past the trade deficit

Supply chain concerns and Trump’s trade war with China have also made it increasingly critical that US manufacturers are able to pivot their supply chains quickly in case of shortages or escalating tariffs, experts say.

“The fact of the matter is supply chains have evolved to flow through China,” Tom Guevara, the director of the Indiana University Public Policy Institute, told Al Jazeera.

That means even if more products are manufactured in the US, any shortage in key components or ingredients sourced elsewhere could also cause things to grind to a halt.

Many of those key components are also part of the US trade deficit with China, which Trump campaigned heavily in 2016 on reducing. But it is a promise that has not been fulfilled, experts say, making it a topic that is likely to come up between Trump and Biden during the upcoming presidential debates.

And while it is a hot-button issue on the campaign trail, some economists say reducing the trade deficit will not necessarily help US manufacturers.

“Say we did get the trade deficit down to zero. We would get a one-time increase in jobs, but tech, as far as we know it, will roll on,” Hufbauer said, explaining that even if jobs are brought back to the US, automation and technological advances may eliminate others.

But, Guevara counters, “balance of trade does matter”.

“It can increase employment, but challenges also include increased productivity and fewer employees needed to achieve the same goals,” he added, explaining those factors could ultimately still lead the number of US manufacturing jobs to decline.

That is why, Guevara said: “Regardless of the next administration, the COVID-19 crisis has exacerbated certain weaknesses in the manufacturing sector that need to be shored up,” potentially through private and public partnerships.

Both candidates have their own proposals on that, too. The Trump administration is creating incentives for private-level apprenticeships. Biden’s platform involves investing in vocational training and partnerships between employers and community colleges.

Economists agree the next administration has a crucial role to play in the future of US manufacturing, particularly as the country recovers from the economic fallout of the pandemic.

“It’s not realistic to expect that we will go back to the same levels we once had where the manufacturing level was double the GDP than it is now, but we can be stronger and more competitive,” Guevara said.

For Bob, Trump’s manufacturing report card factors heavily into his vote. He said he worries Biden’s proposed corporate tax rise could end up hurting workers like himself.

“I worked for eight years under the progressive policies of the Obama and Biden administration,” he said. “But I’ve seen job growth with Trump. How is that not good for the working class?”