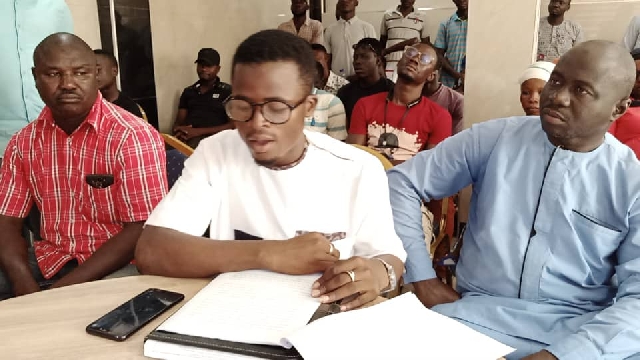 The Concerned Youth Groups of Northern Ghana is calling for the reinstatement of the former Chief Executive Officer (CEO) of the Tamale Teaching hospital, Dr David Kolbilla.

This follows the group’s description of the hospital as “a death trap” due to lack of leadership.

The group insists that the hospital was in a better condition under the leadership of Dr Kolbilla.

It blames the current state of the hospital on “the incompetence of the acting CEO.”

At a Press Conference held in Tamale on Monday, 26 October 2020, the Concerned Youth Groups of Northern Ghana noted that the Tamale Teaching hospital which is the only referral hospital serving the five Northern Regions and beyond “was in a better state as at the end of December 2019,” but “checks at the hospital has revealed that it is now in disarray with no leadership and vision leading to unfortunate happenings within the hospital. Nothing in the hospital seems to be working.”

Referring to the state of the hospital’s radiology department, the group noted that “At the end of December 2019, the ultrasound machines and the computerised tomography (CT) scan were functioning and serving the good people of the North but now all of them are broken down and patients are daily referred to private facilities to undertake those images.

“X-ray that was covered by the National Health Insurance Scheme is no more covered at the Tamale Teaching Hospital. It is sad to note that the bill of the x-ray has been increased from Seventeen Ghana Cedis (GHS17) to Fifty Cedis (GHS50) and even up to Hundred Ghana Cedis (GHS100) depending on the part of the body the x-ray is done.”

The group continued that their “checks at the hospital reveal that the functioning of the hospital is deteriorating and sinking into a deplorable state as a result of lack of leadership.”

It also indicated a pregnant woman would have to struggle “to climb the stairs to the maternity ward of the hospital to receive medical attention when she could have been lifted by a lift easily and safely to the floor,” with “a medical officer looking on helplessly to an emergency case because the basic tools to work with are unavailable.”

“How do you send your patient to the emergency unit with the hope of getting prompt attention to help save his life only to be told to go and buy cotton, gloves, Vaseline gauze and others before your patient receives medical attention. Can you call this situation an emergency? the group questioned.

According to the group, “very important and lifesaving equipment in the hospital are not functioning. In addition to this, there is an erratic power and water supply in the hospital, making life unbearable for patients and staff.”

The group also stated that: “We are aware that all these problems were addressed or being addressed in the previous administration, that is the administration of the immediate former acting CEO,” Dr David Zaawumya Kolbilla.

It further stated that it is “tired of the lack of action from the government to the detriment of the lives of vulnerable poor northerners.”

The group noted that since the hospital is the only hospital serving the five Northern Regions, “if you do not go there consciously you may be taken there unconsciously. It is sad to say the Tamale Teaching hospital in its current state can only be described as a death trap,” hence its concern about the dilapidating state of the hospital.

It further continued that: “the Tamale Teaching Hospital made it clear that Dr David Kolbilla was not sacked in their press release on 31/12/2019 but was only asked to step aside for investigations to be carried out on the allegations made against him. We have been informed that the investigations have since been done and that Dr Kolbilla has been exonerated. If this is true, what is preventing his recall?

The group emphasised that it is “aware of the deliberate attempt by some individuals to prevent Dr David Zaawumya Kolbilla from being reinstated. They do so by peddling falsehood of perceived tribal confusion that might arise as a result of his reinstatement.”

The group said it is of the “opinion that issues of health should not be tribalised, especially more so when those who seek to do this are the perpetrators of wickedness on the people given the background that they are currently in charge of the ills of the hospital.”