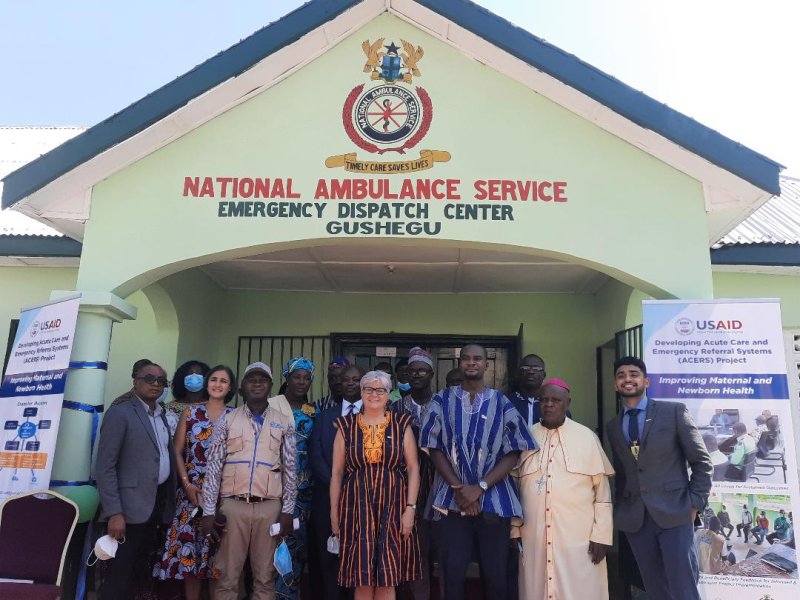 An Emergency Dispatch Centre has been opened at Gushegu Municipality in the Northern Region to coordinate referral activities among the 14 health facilities in the area to ensure quality health care for patients.

The Emergency Dispatch Centre, which is the first of its kind in the country, and equipped with two tricycle ambulances and digitali operations room, receive calls from the health facilities in the municipality about emergency cases that require referral and advise on where such emergency cases should be referred to for treatment.

The move is to among others ensure improved maternal care as well as ensure that patients are transported to facilities that are ready to receive them.

It was constructed by the Catholic Relief Services, an international non-governmental organisation, as part of its Developing Acute Care and Emergency Referral Systems (ACERS) project in collaboration with the Ghana Health Service and funded by the United States Agency for International Development.

The ACERS project seeks to amongst others eliminate the delays in accessing emergency health care to ensure quality health care for especially pregnant women.

Madam Stephanie Sullivan, United States Ambassador to Ghana, who opened the facility at Gushegu on Tuesday, said it had brought emergency health care services to the doorstep of the people.

Prior to establishing this Centre, patients including pregnant women in the communities had to be transported on motorbikes, bicycles and or physically carried by relatives to health facilities for care.

Ambassador Sullivan assured of the commitment of the United States Government to improving maternal and newborn care in the country.

Mr Daniel Mumuni, Country Representative of Catholic Relief Services said the project would be replicated in 10 other areas across the country.

Professor Ahmed Nuhu Zakaria, Chief Executive Officer of the National Ambulance Service lauded the project, saying it had improved the health system for all in the municipality and the country as a whole.

Madam Napaga Tia Sulemana, Coordinator of President’s Special Initiatives called for routine maintenance of the project to continue to serve the people.

Mr Robert Dawuni Waja, Gushegu Municipal Chief Executive appealed for construction of two more CHPS Compounds in the area as well as the upgrading of the Kpatinga Health Centre into a polyclinic status to better serve the people.

Some members of the public gave testimonies as to how the Emergency Dispatch Centre had been useful to them, saying it has help save them during labour to ensure safe delivery.