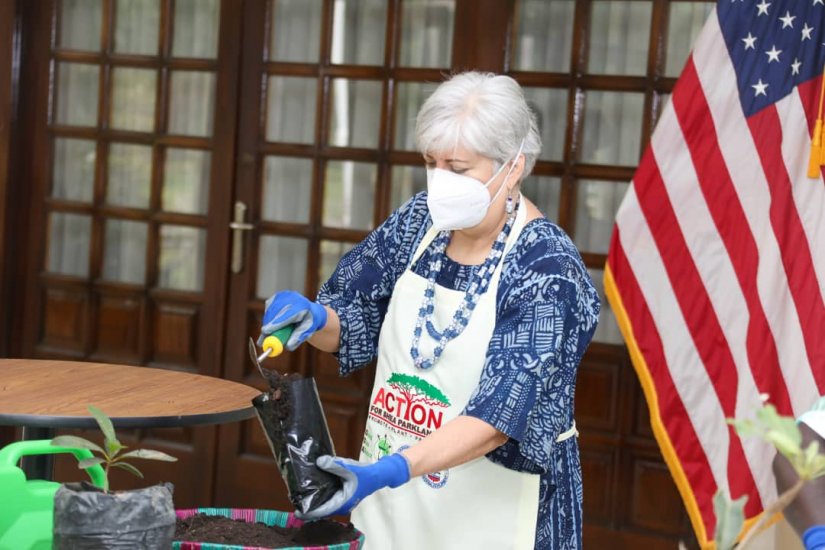 Spearheaded by GSA, the initiative seeks to promote, plant, and protect the shea parklands while advancing a shea industry commitment to plant 10 million trees across West Africa over the next 10 years.

A press release issued by the United States Embassy, in Accra, and copied to the Ghana News Agency, said to commemorate the launch, Ambassador Stephanie S. Sullivan joined members of the Global Shea Alliance and women shea cooperative leaders to plant 50 shea seedlings in seedling bags.

These would be transported to the Northern Region of Ghana for planting during the 2021 shea season.

Ambassador Sullivan, the release said, commended the project’s partners, stating, “Given the impact of the industry on improving incomes for women and their families, I’ve been excited to witness first-hand the enormous growth of the shea export industry in Ghana.
“U.S. companies and consumers continue to play a key role in this growth, ensuring that the industry contributes to Ghana’s economic development while meeting the highest social and environmental standards.”

Shea is a primary source of livelihood for women living in northern Ghana.

Togo and Benin, the release said, were also pilot countries for the ASP initiative.

The seedlings were acquired from a network of small community nurseries established in 2019.

The campaign, the release said, involved 400 women from the northern regions in Benin who planted 2,400 trees in July this year.

In partnership with USAID, GSA is leading the industry’s sustainability effort.

To date, the release said, 100,000 seedlings had been raised and 8,000 shea trees planted with private sector funding under the USAID-funded “Sustainable Shea Initiative” (SSI), a public-private partnership with GSA.

j7 “The SSI is an $18 million, five-year program that promotes the sustainable expansion of the shea industry in Ghana, Benin, Côte d’Ivoire, Togo, Mali, Nigeria, and Burkina Faso as well as increases the incomes of rural women, who form the backbone of the industry, ” the release explained.