UK millions of displaced workers during the pandemic may never return 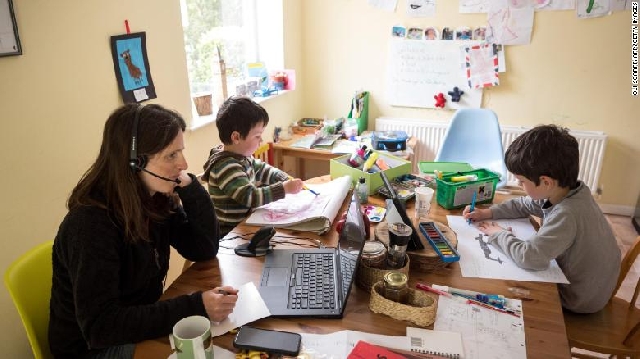 Moira, an employee of a regional council, works from home during the pandemic.

Britain has stumbled through a highly political pandemic.

Virtually every move Boris Johnson’s government has made in response to the Covid-19 crisis has sharply divided the weary nation — starting with his refusal to sack a roaming chief aide in May, and encompassing since his struggles on testing, contact tracing, technology, schools and lockdown restrictions.

But as the country enters a new stage in its coronavirus response and cases tick upwards at an alarming rate, the political back-and-forth is entering a new arena: the lounges, bedrooms and studies of millions of British workers.

Nearly half of the United Kingdom’s 30 million employees have worked from home during the pandemic, according to the country’s statistics body, with an additional 9 million placed on the country’s furlough scheme.

They were sent there by the government, who ordered workplaces to shut as the virus started spreading.

But now, despite rising cases and a growing public desire for flexible work arrangements, the government desperately wants employees back in offices.

Ministers and business leaders cite the economic impact on city centers as the driving force behind their push — but their rhetoric is irking many employees, who feel it suggests they’re not working hard enough from home.

“The economy needs to have people back at work,” Foreign Secretary Dominic Raab told the BBC this week. “People are going back to the office in huge numbers across our country, and quite right too,” Johnson added to his Cabinet on September 1, without providing evidence for the assertion.

The tone is even sharper in much of the British media.

“Ghost town Britain HAS to get back to work and Boris Johnson must lead the way,” read the headline of a newspaper column by Carolyn Fairbairn, head of the Confederation of British Industry.

“They’re back at work … where’s rest of UK?” was the front-page headline of the same paper the day schools reopened earlier in September.

The Telegraph ran a jarring quote attributed to an unnamed minister days earlier, telling people: “‘Go back to work or risk losing your job’.”

Shelly Asquith, the Health, Safety & Wellbeing Policy Officer at the TUC, the congress of UK labour unions, describes the national discussion of returning to work as a blame game.

“There’s been a concerted effort from some sections of the media to make out that a lot of people who are working from home aren’t really working,” she told CNN Business.

“And there’s a lack of understanding of how hard people have been working in lockdown.”

“Some of the rhetoric that has been employed in recent times … is atrocious,” added Phil Taylor, who is conducting research into experiences of homeworking for the Institute of Employment Rights, saying it “detracts attention away from the gross negligence of the government over many months.”

“If people don’t wish to go back to the office, they shouldn’t be blamed for it all.”