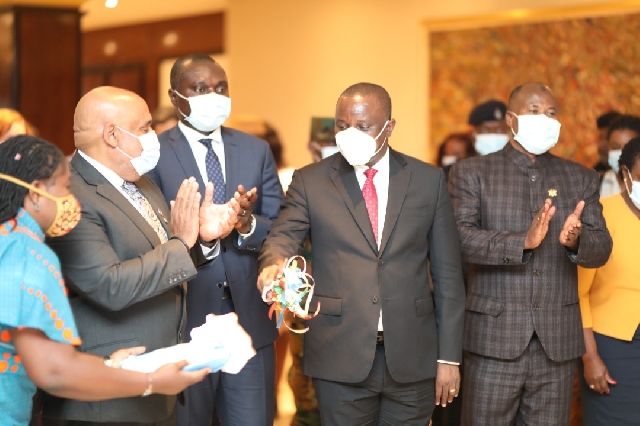 Minister for Defence, Dominic Ntiwul has assured Ghanaians of the government’s commitment to resource the country’s security forces to ensure peace in the country ahead of the December polls.

Mr Nitiwul reiterated the government’s resilience to ensure that secessionists and others who threaten the peace of the country do not succeed.

Mr Ntiwul was speaking to the media on the sidelines of the 75th anniversary of the United Nations (UN) held at the Accra International Conference Centre on Monday, 19 October 2020.

The Minister noted that Ghana has carved a niche for itself as a professional in peacekeeping since 1960.

“From the far East to the Middle East, to Africa to Asia, to South America to virtually every part of the world. So when it comes to peacekeeping, apparently, everybody acknowledges that the men and women of the armed forces, the Police service, prison service, the Immigration service have really done the black race a lot of good. Especially people from Ghana. They’re some of the most professional soldiers and professional peacekeepers you can find around the world.”

Mr Nitiwul further noted that due to the professionalism of the country’s security forces who go on peacekeeping, they are commended by countries all over.

“When I visited them in Lebanon, you could clearly feel it, the President told me point blank that if they were to ask people to leave, Ghana will be the last people that they’ll want them to leave his area because of the professionalism that they attach to peacekeeping. So it’s clear that Ghana has stood and done its part when it comes to world peace, that’s why I always encourage us to maintain that.”

Mr Ntiwul indicated that the country is able to “export peace because of the peaceful nature of its people.”

He further assured citizens of the government’s efforts to ensure that the country’s security forces are well resourced to maintain the peace of the country.

“We’ve been engaging everybody, the chiefs, the opinion leaders, the people, to win the hearts and minds of all the people in the area.”