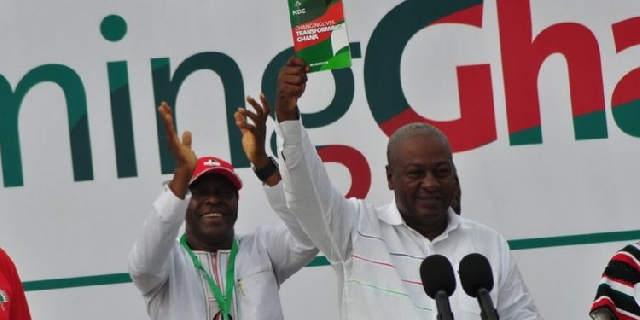 The flagbearer of the main opposition National Democratic Congress (NDC), Mr John Dramani Mahama, has said unlike his government’s Green Book, which documents all the projects he did during his presidency, the NPP’s delivery tracker is full of non-existing projects.

The Akufo-Addo-led government recently launched www.deliverytracker.gov.gh, a website that enables the public to “interrogate the data” on infrastructural projects undertaken by the government.

Vice President Alhaji Dr Mahamudu Bawumia did the launch on Tuesday, 18 August 2020, to help Ghanaians know the promises fulfilled so far in the almost four years of the NPP administration.

However, Mr Mahama says the projects captured on the tracker do not exist.

Speaking to the Wechiau Na and his sub-chiefs at Wa in the Upper West Region, as part of his campaign tour, Mr Mahama canvassing for votes said: “Recently they came with something they call a delivery tracker to show all the developments they had done in the country.

“In our Green Book, we don’t have toilets because toilets and things are the jobs of the district assemblies.

“There are some projects that are the responsibilities of district assemblies and, so, we showed the schools, the water, CHPS compounds, highways, interchanges, airports, harbours, and that green book, if you go through it, there’s no single project that if you go to the site the project is not there.

“And yet this delivery tracker when they put it up, almost every district will find projects that don’t exist. They say a project is ongoing and it is not…”

Mr Mahama also accused the government of borrowing some GHS140 billion in three-and-a-half years but has nothing to show for it.

The former president said: “The tragedy of this government is that they have borrowed so much and received so much resources and yet there’s nothing to show for it”.

“After borrowing almost GHS140 billion in three-and-a-half years, show me one single secondary school or a hospital or roads or electricity or water”, Mr Mahama dared the NPP.

“They say I borrowed GHS54 billion when I was President over four years and yet everywhere you go in this country, you’ll see development projects that the GHS54 billion has been used to execute,” he added.