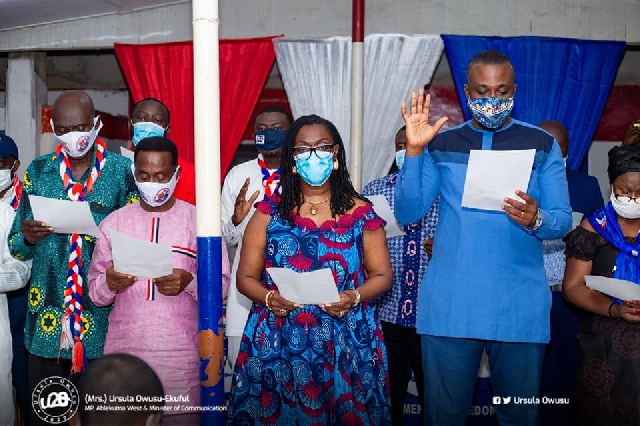 The campaign team for the Member of Parliament for Ablekuma West, Ursula Owusu-Ekuful, has been unveiled ahead of the 2020 parliamentary and presidential elections this December.

The makeup of the campaign team was announced at the governing New Patriotic Party’s office in Dansoman, Accra.

Inaugurating the team tasked with ensuring victory for the NPP in both the parliamentary and presidential polls, the Chairman of the team, Mr Samuel Bright Osei-Puni, extolled the competence of the members drafted into the team.

He urged them to work assiduously and remain focused in retaining the Ablekuma West seat as well as giving President Akufo-Addo four more years to continue his “good work”.

Gracing the event was the Director of Operations at the Jubilee House, Mr Lord Oblitey Commey.

In his address to the members of the team, Mr Commey urged them to adopt a mixed approach, including door-to-door and social media campaigns to contain the spread of COVID-19.

We have an election to win and power to retain.

The task is challenging, especially, those of us in Greater Accra, so, we need to put our house in order, campaign vigorously by convincing the electorate of our success story as well as our planned programmes when given the mandate,” Commey said.

Also in attendance were Dr. Albert Antwi-Boasiako, the National Cybersecurity Advisor; the MCE for Ablekuma West, George Cyril Bray; some regional executives of the NPP in the Greater Accra Region, among others.