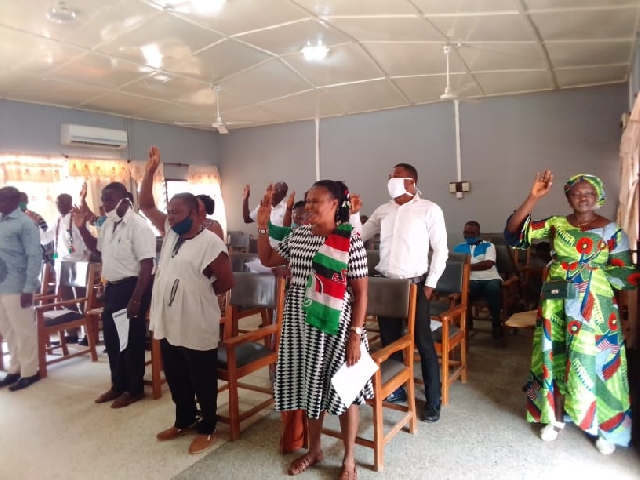 The main opposition National Democratic Congress (NDC) in the Hohoe Constituency of the Volta Region has launched its campaign committee for the December 2020 polls.

The Committee was launched in Hohoe on Tuesday, 25 August 2020.

The 29-member committee, which is headed by Victor-Herman Condobrey, was launched for the main purpose of working to ensure victory for the NDC’s parliamentary candidate for the constituency, Professor Margaret Kweku, and the party’s flagbearer Mr John Mahama.

The party’s Volta Regional Secretary, James Gunu, advised members of the committee to work hard to ensure victory for the party in the upcoming polls.

He further assured the campaign team of the party’s support in terms of resources to ensure a smooth campaign.

“We have a responsibility, we will need logistics and resources, the campaign team must devise means of raising resources in order to prosecute this campaign task, so, whatever means or strategies that you can put in place to ensure that we get the needed resources, you must do that.

“The region will also not relent in its efforts to support the constituency; the national level is also determined and when the resources come, we don’t want the situation where the resources come [and] you misuse it,” Mr Gunu said.

For his part, the leader of the campaign team stressed the determination of the team to work hard to ensure victory for the party in the constituency in the upcoming polls.

The Volta Regional NDC Secretary also donated a Hewlett-Packard (HP) laptop with a LaserJet printer to the constituency on behalf of the party.