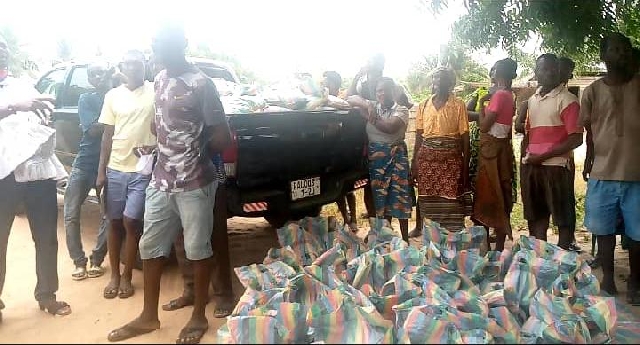 The parliamentary candidate of the governing New Patriotic Party (NPP) in the Ketu South constituency of the Volta Region, Mr David Thiano Quashie, and his brother Parlous Quashie Kwablatsey, have donated food items and an amount of GHS10,000 to residents in some border communities in the area.

The beneficiaries have had to endure hardship and hunger after the closure of the borders due to the novel coronavirus pandemic.

The beneficiary residents were mostly petty traders at Aflao and Lomé as well as hawkers and Kente weavers in Avata, Sruhume and several other communities in the Ketu South municipality.

They bemoaned inability to feed their families due to the border closure.

Mr David Thiano Quashie and his brother, on Friday, 28 August 2020, made the gesture to nearly 1,000 households in the various communities.

The move, according to Parlous Kwablatsey Quashie, is to help the residents to, at least, feed and take care of their family needs, as they wait for the government to open the land borders to enable them engage in their normal businesses.

“These people are unable to trade through no fault of theirs and the government’s, and for the meantime, we are here to give the over 1,000 households maize and foodstuffs as well as a cash amount of GHS10,000 to help them take care of their families,” he said.

Some residents told the media, after receiving the items, that Kente weaving, which is one of their main thriving trades, is no more lucrative due to the border closure and called on the government to reopen the land borders.

Mr Quashie reiterated that the people of the Volta Region must change their mindset and voting pattern, which has not brought the needed development to them.

Mr Quashie encouraged the people to start endorsing the NPP massively so they can get all the developments they desire.

He said: “I was once an NDC member but had to join you NPP because of obvious reasons. The NDC is not helping you in any way, so, why don’t you support the NPP for a better future?”

Mr Quashie also urged the people to give his brother, David Thiano Quashie, the chance to represent the Ketu South constituency in parliament and give President Akufo-Addo another chance to do more for them.